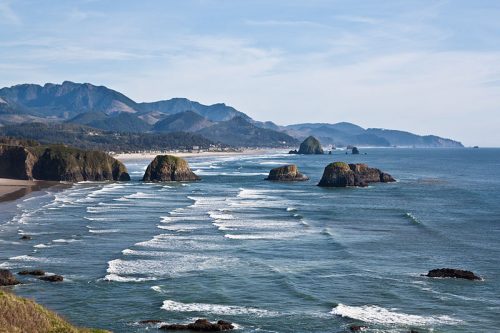 As observations compel scientists to accelerate their estimated timelines for the melting of land ice at both poles, studies are beginning to define the dramatic, potentially enormously costly implications for the United States.

Citing a report to the California Ocean Protection Council, E&E notes that “the latest science shows that the rate of ice loss from Greenland and Antarctica is increasing. That soon will become the primary contributor to global sea level rise, overtaking ocean expansion from warming waters and the melting of mountain glaciers and ice caps.”

The effects of the Earth’s rotation and gravity magnify the effects of global sea level rise on the California coast, said Dan Cayan, director of the Climate Research Division at the Scripps Institution of Oceanography, putting the Sunshine State “in the bull’s-eye.” The lowest estimate for sea-level rise at San Francisco by the end of the century is one foot (30 centimetres). The highest is 6.9 feet (two metres). The difference depends on rates of glacial melt and breakdown that appear to be accelerating, but whose dynamics are incompletely understood, and future trends are uncertain.”

Climate Central, meanwhile, reports on a U.S. National Oceanic and Atmospheric Administration study warning “that regional effects of gravity and ocean current changes triggered by the start of the [West Antarctic] ice sheet’s collapse” this century “could lead to more than 3.7 metres of sea level rise engulfing some coastlines in the Lower 48. That’s about the height of a one-story house.”

“Miami, Virginia Beach, Boston, and Stockton, a river port city in California’s Central Valley face some of the greatest risks,” Climate Central notes, accompanying its story with a variety of maps and 3D renderings.

Other research finds that ice loss in the Arctic alone implies a doubling of estimates of sea level rise this century, while the West Antarctic ice sheet is melting faster than expected.

“The likelihood [of extreme ocean rise] nearly entirely vanishes,” Climate Central notes, “if the global economy transitions quickly from polluting fuels to clean energy, as is envisioned by the Paris climate treaty.” However, for now, “weak climate policies and high pollution trends mean the world is not on track to meet the treaty’s central goals.”