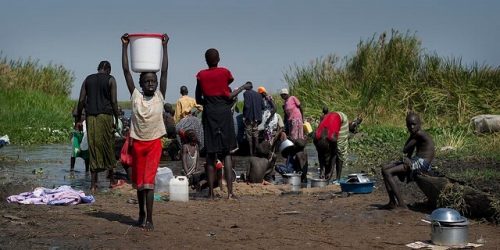 The 400 million people who depend on the predictability of the River Nile face an uncertain future as global warming delivers more extreme weather.

LONDON, 1 May, 2017 – A 5,000-year-old problem is about to get much more problematic. Climate change will make it harder than ever to bank on the flow and annual flood of the River Nile.

The Nile is the natural world’s great gift to human history: its annual flood delivered nourishing silt and vital water for the farmers who supported a hierarchy that founded a civilisation.

So vital was the Nile flood that the first hydraulic scientists – priests of the ancient temples – built and managed a series of “nilometers” to detect, predict and monitor the size of the annual inundation.

And so important was this annual flow that it gave the world the biblical story of Joseph, the Hebrew slave who helped Pharaoh make the most of the harvests in seven fat years, to survive seven lean years of drought.

Need for the Nile


And the Nile now matters more than ever: 400 million people in 11 countries depend on the flow in the Nile basin. Many of them already live at water scarcity levels of below 1,000 cubic metres of water per person per year.

By 2050, the population of the Nile basin will double, and start heading towards a billion. So people need the river more than ever.

But, according to a new study, the Nile is about to become more unpredictable. Climate change, as a consequence of global warming driven by carbon dioxide build-up in the atmosphere, itself a consequence of ever more prodigal combustion of fossil fuels, will overall mean that more rain will fall and flow down the water courses that feed the Nile system.

“It’s not abstract. This is happening now.
We think climate change is pointing to the
need for more storage capacity in the future”

But the same computer simulations, reported in Nature Climate Change, also predict that under the notorious “business as usual scenario” in which humans go on exploiting fossil fuels, there will be substantially fewer “normal” years, with flows of between 70 and 100 cubic kilometres of water per year, and more years of either devastating flood or withering drought.

The Nile flow is affected by the cycle of Pacific temperature oscillations: 2015 was an intense El Niño year, which saw a drought in Egypt. The same oscillation’s obverse, La Niña in 2016, was linked to high flooding.

“It’s not abstract. This is happening now,” says Elfatih Eltahir, a civil and environmental engineer at the Massachusetts Institute of Technology in the US, and one of the researchers. “We think climate change is pointing to the need for more storage capacity in the future.”

Management of the river’s flow has been a political problem for decades, to be made more complex by the construction of Africa’s largest reservoir, the Grand Ethiopian Renaissance Dam near the border with Ethiopia and Sudan.

And the region faces problems that come with climate change, and, in particular, extremes of heat. Researchers have already warned that the Middle East and North Africa could become increasingly inhospitable, and in 2015 Professor Eltahir warned that the Gulf region could become so hot and humid as to be potentially lethal.

He and his co-author arrived at the unhappy forecast for the Nile by testing computer simulations of future climate change and checking flow rates and rainfall records for the past 50 years.

And they find that the average volume of flow could increase by 10% to 15%, but the flow variation from year to year – the shift towards too much or too little – is likely to increase by 50%. – Climate News Network