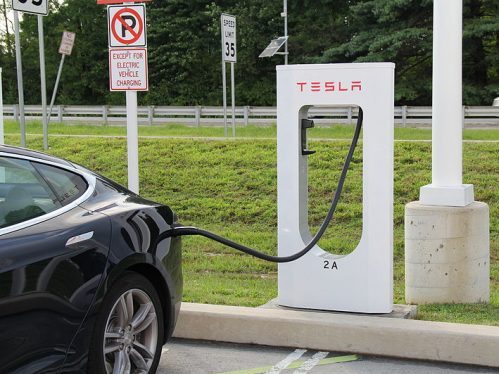 The new capacity is part of an effort to allay customers’ concerns about access to charging as the company sets its sights on a dramatic increase in production volume, from 76,000 electric cars in 2016 to 500,000 in 2018, Bloomberg reports.

“As always, the most convenient way to charge is to plug in overnight where you park,” the company notes in a blog post last week. “However, to better serve the needs of owners who are traveling or those who don’t have access to reliable home charging, we will continue to aggressively expand our public charging networks.”

“Some of the new stations for these Superchargers will be powered by solar panels, have customer centres, and enough chargers to accommodate ‘several dozen Teslas’ at the same time,” Bloomberg notes. “Tesla will build larger sites along our busiest travel routes,” the blog explains. “In addition, many sites will be built farther off the highway to allow local Tesla drivers to charge quickly when needed, with the goal of making charging ubiquitous in urban centres.”

In a separate analysis, Bloomberg’s Tom Randall points to the imperative for U.S. EV manufacturers to drive up production volumes and drive down unit costs, ideally before government tax credits disappear. “The $7,500 federal incentive is set to taper off as each manufacturer reaches its 200,000th U.S. sale,” he writes. “For Tesla, that day will arrive sometime next year. Nissan and GM won’t be far behind—and any extension of the subsidy by the Trump administration seems unlikely.”

Apart from the battery, an EV is cheaper to produce and maintain than its internal combustion counterpart, Randall notes, and Renault has tried to embrace that reality by selling its popular Zoe EV without a battery, then offering the cells on a monthly lease.

But even so, “for true mass-market appeal, the up-front sticker price is what matters most, and battery prices must come down further. Fortunately, prices are falling fast—by roughly 20% a year.” But historically, “low production numbers and high battery development costs created a valley of despair for EVs that lasted decades, which is why subsidies have been critical to giving the sector enough breathing room to eventually stand on its own.”

That era is now coming to an end, Randall writes, with Tesla and Nissan about to introduce models priced at US$35,000 and below $30,000. Other manufacturers are on their way with their own new offerings, as well.

That means the “period of greatest peril is ending for EVs, and the time of greatest promise is beginning,” he concludes. “All the top carmakers are investing billions of dollars to electrify their drivetrains, and the smart ones will compete aggressively on pricing in the short term in order to establish market share for the long haul. Incentives are important, but they won’t define the market for much longer.”

Tax Reform Could Dry Up Capital for U.S. Solar Projects, But Communities Might Still Step Up