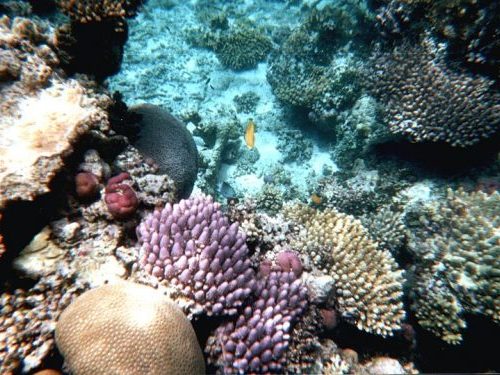 Two separate posts last month—one of them on the agony of future climate impacts, the other on practical strategies for promoting marine conservation—delivered equal and opposite examples of the information and messaging options available to the climate and energy community.

The first, a series of before-and-after posters by Berkeley, CA-based artist Hannah Rothstein, adapted a collection of classic U.S. national parks posters to show what some of the country’s most iconic landscapes will be like if climate change is allowed to continue unchecked. The originals were produced by the Works Progress Administration between 1938 and 1941. The updates were based on Rothstein’s research on foreseeable climate impacts.

“National Parks 2050 is a call to action,” Rothstein writes. “Drawing upon the classic National Parks posters, this series shows how climate change will affect seven of America’s most beloved landscapes. In doing so, it makes climate change feel close to home and hard to ignore.”

“The National Park Service has been a climate leader in the federal government, preparing parks for changes,” Climate Central notes. “But it’s a vast system with 417 sites under its purview. It also faces a US$12-billion maintenance backlog,” not to mention a climate-denying administration in Washington, DC that considers investments in a climate preparedness of mitigation a waste of taxpayers’ money.

Rothstein’s posters are a wake-up call to anyone who loves wild places. But they’re also devastating enough to move a veteran climate hawk to tears of (at least momentary) despair—which is exactly the messaging strategy that marine biologist Nancy Knowlton urges against in an opinion post on Nature.

“The best way to encourage conservation is to share our success stories, not to write obituaries for the planet,” Nature writes, in its synopsis of her argument.

Knowlton, a coral reef specialist, notes that she’s no stranger to the loss of beautiful, irreplaceable ecosystems. But when she and a group of colleagues formed the U.S. Center for Marine Biodiversity and Conservation in 2001, they quickly learned that it was a mistake to keep their focus on the current state of the oceans.

When the group began its work, “we thought of it as medical school for the ocean,” she recalls. But “doom and gloom consumed the entire course. Basically, we were training our students to write ever-more-refined obituaries for the seas,” and “we quickly realized the folly of focusing so much on the problems—we could see it on our students’ faces.”

Realizing that “in medical school the focus is on preserving life, not describing death,” Knowlton and her husband launched a symposium series, Beyond the Obituaries, that focused on success stories in ocean conservation.

The experience taught her that “unrelenting doom and gloom in the absence of solutions is not effective,” she writes. “Social scientists have known for decades that large problems without solutions lead to apathy, not action. Yet much of conservation communication still seems to be focused on scaring people into caring.” (Not unlike some branches of climate communication.)

Knowlton’s other realization was that “an extraordinary number of success stories are largely unknown—not just to the general public but also to conservation scientists, policy-makers, and philanthropists.” Those stories can be an antidote for the conservation students who’ve told Knowlton they almost left the field because of the unrelenting bad news in their courses.

“I am no Pollyanna when it comes to the future of the planet,” Knowlton concludes. “The catastrophic coral bleaching of the Great Barrier Reef this year and last cannot be denied. The problems remain huge: daunting even.”

But “we must also celebrate successes: species brought back from the brink of extinction, landscapes and seascapes protected or newly restored, and the integration of sustainability into corporate boardroom decisions. Even when these success stories are shared, we often undermine them with caveats and bury the story of how they were accomplished. Yet talking about these successes is how we will learn to expand them.”