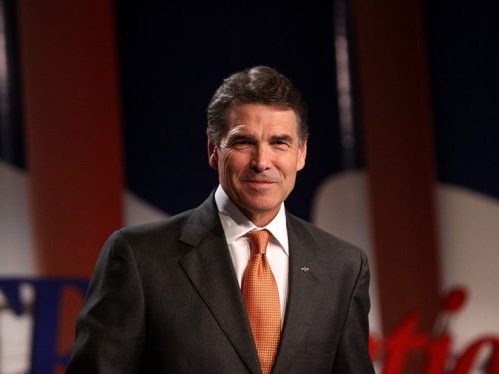 The Trump administration may try to use national security—specifically, the reliability of the U.S. electricity grid—as a pretext to pre-empt renewable energy standards and targets now in place in 38 states and multiple cities, judging by comments last week by Energy Secretary Rick Perry.

“There’s a discussion, some of it very classified, that will be occurring as we go further,” he said, according to Time Magazine’s account of an onstage interview at the 2017 Bloomberg New Energy Finance Summit. “The conversation needs to happen so the local governors and legislators, mayors and city councils understand what’s at stake here in making sure that our energy security is substantial.”

“There’s a conversation, there’s a discussion, some of it obviously very classified, that will be occurring as we go forward, to make sure that we have the decisions made by Congress, in a lot of these cases, to protect the security interests of America,” he said, in the E&E News version of the story. “Local entities do in fact get preempted with some of those decisions.”

Perry’s remarks were premised on the old, discredited belief that central electricity grids can only take a relatively small percentage of distributed, renewable power without risking system reliability. Citing a report in PV Magazine, the Energy and Policy Institute notes that the U.S. National Renewable Energy Laboratory “has already written studies that show we can rely on renewable energy to provide much more of our electricity than it does today. In fact, one 2012 NREL study found that we could get 80% of our electricity from renewable sources by 2050 using existing technologies. Other studies by states and grid operators confirm that renewable energy is reliable.”

The U.S. Department of Defense “has made significant investments in renewable energy in order to enhance national security—an investment that continues with Trump in the White House,” the Institute notes. Where the U.S. military establishment does see a national security risk, however, is in the potential for runaway climate change. That’s a threat that Trump Defense Secretary James Mattis acknowledged during his confirmation hearings before the Senate Armed Services Committee.

“Climate change is impacting stability in areas of the world where our troops are operating today,” he said in a written response to questions from Democrats on the committee. “Climate change is a challenge that requires a broader, whole-of government response,” and “if confirmed, I will ensure that the Department of Defense plays its appropriate role within such a response by addressing national security aspects.”