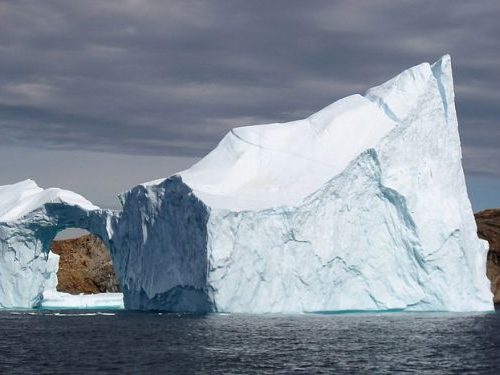 Ice and glacier loss in the Arctic could produce sea level rise of 52 to 74 centimetres (1.7 to 2.4 feet) by 2100, nearly double the levels projected in the most recent report of the Intergovernmental Panel on Climate Change, according to a study released last week by the Arctic Council’s Arctic Monitoring and Assessment Program (AMAP).

“Because of emerging processes, especially related to the Greenland ice sheet and the Antarctic ice sheet, it now looks like the uncertainties are all biased positive,” said glaciologist William Colgan of the Geological Survey of Denmark and Greenland, who contributed to the sea level rise section of the report, titled Snow, Water, Ice and Permafrost in the Arctic.

The AMAP study used two temperature scenarios that had prompted the IPCC to project sea level rise of 32 to 45 centimetres (1.0 to 1.5 feet) between 2081 and 2100. But “that global body—whose high-end sea level rise number for the year 2100 was just shy of one metre, or 3.2 feet—has often seen its assertions on sea level rise faulted by scientists for being too conservative,” the Post notes. AMAP, along with several other research sources cited in the Post article, factored in new knowledge on the accelerating pace of ice loss—in this case, from Arctic glaciers and the Greenland ice sheet.

The AMAP findings “are not easy to stomach,” InsideClimate News notes. “The authors also write that the Arctic Ocean could be largely ice-free in summer as early as the late 2030s, and that an influx of warmer water could alter climate as far south as the tropics. But they also include a nugget of hope: There is still time to avert some of the worst impacts.”

While the Arctic is already locked into a minimum 4°C temperature increase from late 20th century levels by 2050, “what happens after that—whether the Arctic’s average temperature climbs to 6°C above average or rockets to twice that—depends largely on us,” ICN reports. “If the goals of the Paris agreement are met, end-of-century sea level rise would be reduced by 43%—or more than 20 centimeters—compared with a business-as-usual scenario, according to the report. It would also stabilize temperatures over the Arctic Ocean in winter at 5° to 9°C above the 1986-2005 average.”

That outcome would stabilize and significantly reduce the loss of snow cover and permafrost.

AMAP’s report releases to this week’s International Conference on Arctic Science, ahead of an Arctic Council ministerial next month in Fairbanks, Alaska, also included a series of studies on Arctic adaptation, focusing on the Bering-Chukchi-Beaufort, Barents Sea, and Baffin Bay/Davis Strait regions. “Though the challenges and methods of addressing them differed among regions, the reports’ authors found some common themes,” ICN notes. “Climate change impacts all elements of people’s lives in the Arctic, yet their stated concerns are often tied to jobs, food, and recognizing some of the economic potential of natural resources.”

Policy-makers “need to start planning for this,” said AMAP Deputy Executive Secretary Jon Fuglestad. “I don’t think I’ll offend anyone by saying that the government structure isn’t prepared for meeting this future because it’s too fragmented. Adaptation, planning—it takes time. You need to know what you’re going to adapt to, and you need to have a governance structure that can meet the future changes.”