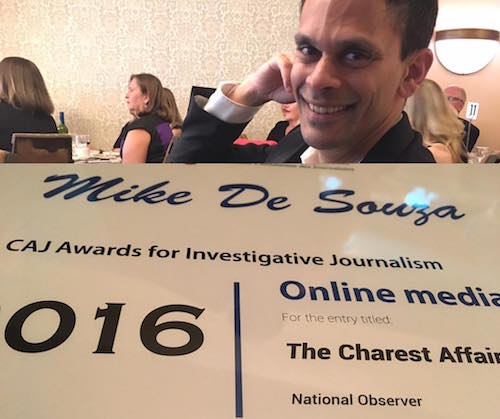 “Your work stands as a testament that despite the increasing, complex challenges facing our industry, Canadian journalists continue to produce exemplary journalism,” CAJ writes, in a congratulatory note to all its 2017 award winner.

The investigative series, beginning with a news report last July, created a perception of bias and calls for recusals on the part of panelists involved with the National Energy Board hearings on the controversial pipeline project. The three panelists, including NEB Vice-Chair Lyne Mercier, did ultimately recuse themselves in early September, and both Mercier and NEB Chair Peter Watson agreed to limit their duties related to the project.

“This is a highly unusual step,” the NEB’s Energy East Process Advisor Team said at the time. “We are not aware of any instance in the past where a Hearing Panel has stepped down. Ultimately, however, this is the right thing to do. Canadians deserve to have confidence that decisions made by the Board are free of apprehension of bias or any perceived conflict of interest.”

In early fall, National Observer Editor in Chief Linda Solomon Wood issued a fundraising appeal to help De Souza and the rest of the Observer team get through the stack of tips and leaked documents they were receiving.

“Mike De Souza’s desk is stacked with documents filled with emails on secret backroom meetings, data on dangerous projects and faulty oversight,” she wrote. “He works as hard as any reporter I’ve known, but he cannot get to all these stories on his own.” With enough new subscriptions—at the time, Solomon Wood was looking for 1,000 by year’s end—“Mike can hire more reporters to dig into this Very Serious Stuff, stuff you need to know about ASAP, just sitting there on his desk.”

(If you still haven’t subscribed to the Observer, it isn’t too late.)