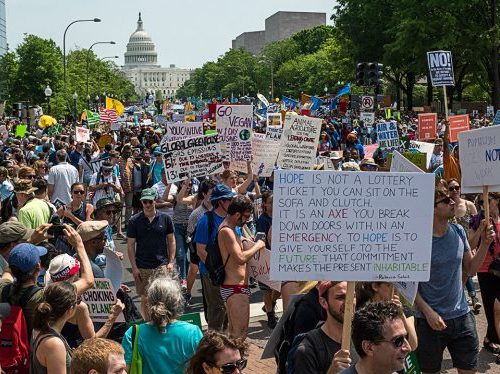 From Edmonton to Vancouver to Toronto, Canadian protesters took to the streets for the second time in a week Saturday, among the hundreds of satellite rallies around the world that took place while an estimated 200,000 gathered in Washington, DC for the People’s Climate March.

The DC march took place on a day of sweltering heat (of course), while Donald Trump retreated to Pennsylvania coal country for a rally to mark his hundredth day in office. “Hang on EPA, the midterms are coming. 2018,” read one sign carried by Kathy Sommer of Stony Brook, NY. (Just 556 sleeps to go—Ed.)

“The 2017 People’s Climate March was in the works even before Trump was elected,” ThinkProgress notes. But “the march turned into a de facto anti-Trump demonstration, especially in some of its other iterations in 350 cities across the country. In New York, thousands showed up for the ‘100 days of failure’ march.” And many of the marchers in DC connected the climate protest with other big-picture concerns.

“In going big, the march reveals a deeper truth about climate change: nobody is immune from it and we all have a role in solving it,” writes Climate Central Senior Science Editor Brian Kahn. “That’s because climate change touches every aspect of life on earth and the solutions require rethinking the global economy. Everyone has a stake.”

He adds that “bringing together so many groups to march also underscored that a large cross-section of society is clamouring for solutions (or already working on them).” Kahn cites tech and climate writer Robinson Meyer’s observation in The Atlantic that a big-tent approach “succeeds in part because climate change is the second-most-pressing concern for many politically activated progressives, who often have another stake in the fight through some other favored issue.”

“A lot of these issues are intersectional,” said Iraq war veteran Crystal Cravens, noting that she and her fellow veterans were protesting wars being fought due to America’s dependence on fossil fuels. As a black woman, Cravens added that her community is on the front lines of climate change.

“Climate change is directly [related] to the oppression of black and brown people,” she told ThinkProgress. “When the food shortage comes, we are already redlining in our communities, so it is going to hit us hardest.”

InsideClimate News reports a similar focus on climate justice among many of the protesters. “This is a critical time to learn from the mistakes of the past and include front-line communities in resilience planning for climate change and sea level rise,” University of Miami grad student Kilan Ashad-Bishop told a news conference before the march.

Retired environmental educator Jane Eller of Lexington, KY carried a sign that identified her as a “granddaughter of a coal miner, grandmother of the solar generation”. She said she’d spent days lobbying her state’s congressional delegation, urging Senate Majority Leader Mitch McConnell (R-KY) “to become a leader in this. We asked him, ‘Who should we hold accountable when the climate damage becomes intolerable?’” But she said the Kentucky representatives she met with “are all deniers”, among the 180 currently sitting in Congress.

In Edmonton, about 200 people marched from Churchill Square to the provincial legislature to demand action on climate change and a swift transition to renewable energy. ““The climate crisis, it’s really critical right now. To sit around and do nothing is not really an option,” said protest organizer Hannah Gelderman. “It’s quite scary when you look at the science, to be honest. For me, that’s compelling enough to get out there and be doing stuff and be organizing and doing whatever things I can in whatever way to work towards solutions.”

In Vancouver, dozens of groups brought supporters out to an event that drew hundreds in spite of rainy weather. “I think it’s really important that people in Canada see that there’s a climate justice movement, and that we really have very big concerns with what Justin Trudeau’s doing, as well. It’s not only Trump who’s having policies that are dangerous for the environment,” said organizer Thomas Davies of Climate Convergence.