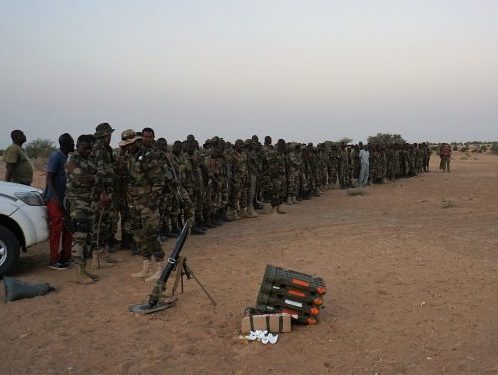 Climate change is on track to “fuel acts of terrorism and strengthen recruiting efforts by terrorist groups such as Islamic State and Boko Haram,” The Guardian reports, citing a report by the Berlin-based Adelphi think tank for the German foreign office.

“Terrorist groups are increasingly using natural resources—such as water—as a weapon of war, controlling access to it, and further compounding and exacerbating resource scarcities,” wrote report author Lukas Rüttinger. “The scarcer resources become, the more power is given to those who control them, especially in regions where people are particularly reliant on natural resources for their livelihoods.”

So “as climate change affects food security and the availability of water and land, affected people will become more vulnerable not only to negative climate impacts, but also to recruitment by terrorist groups offering alternative livelihoods and economic incentives.”

The report looks at food and water shortages, near-economic collapse, and failing governments in the drought-stricken Lake Chad region of central Africa as a factor driving recruitment by Boko Haram. “In north-eastern Nigeria, the region closest to Lake Chad and where Boko Haram is strongest, 71.5% of the population live in poverty and more than 50% are malnourished,” the report states. “This kind of economic deprivation provides an ideal breeding ground for recruitment by Boko Haram.”

In Syria, meanwhile, “the now six-year civil war and rise of ISIS was, not caused, but exacerbated by one of the worst and widest droughts in the country’s history, which drove hundreds of thousands from the land, and sent millions into extreme poverty and food insecurity,” The Guardian notes. The so-called Islamic State “is using water as a weapon of war, the report argues, controlling dams to harm enemies and expand its own territory.”

And in Afghanistan, a climate-vulnerable country where more than half of local conflicts are about land and water, “diminishing rainfall and advancing desertification are likely to spark further violent clashes between nomads and pastoralists over access to pastures and water and food.”

While climate change doesn’t cause terrorism on its own, Rüttinger told the paper, it “creates an environment where terrorism can thrive” while aggravating existing local tensions.