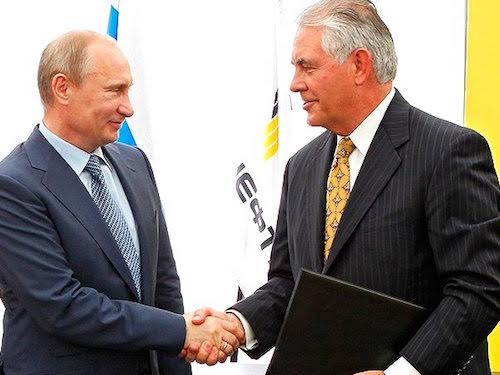 ExxonMobil faces an uphill climb in its quest for U.S. government permission to pursue a Black Sea business deal with Russian oil company Rosneft, even with its former CEO now serving as Donald Trump’s secretary of state, the New York Times reports this week.

The request for an exemption from U.S. sanctions against Russia, first reported Wednesday in the Wall Street Journal, drew immediate, sharp criticism from Sen. John McCain (R-AZ). “Are they crazy?” he tweeted. Michael McFaul, U.S. ambassador to Russia under President Barack Obama, added that if the government approves the request, “then all that tough talk last week about Russia was just that — talk.”

But at the Institute for Energy Economics and Financial Analysis (IEEFA), Finance Director Tom Sanzillo sees the announcement as an attempt to distract from another poor quarterly report the company is about to release to shareholders.

“There is shrewd method to Exxon’s latest madness,” he writes. “In the very short term, on April 28, the company has a quarterly earnings call on which eager stock analysts will more than likely take the bait on Exxon-Rosneft and use their allotted time to go down the rabbit hole. What better way to deflect another shoddy quarter of performance?”

Exxon applied for the waiver under the Obama administration, and anonymous State Department and fossil industry officials told the Times the company is now pursuing the discussion with the Trump White House. The U.S. imposed economic sanctions after Russia invaded Crimea in 2014.

“The oil industry official said the application had been made in 2015, with ExxonMobil arguing that it could lose its contractual exploration rights in the Black Sea if it did not begin drilling operations by the end of 2017,” the paper reports. “European companies, particularly Eni, the Italian oil and gas giant, could then pick up the work.”

But “the proposal is now before the Trump administration at a delicate time in Russian-American relations, with rising tensions over the war in Syria and a looming congressional inquiry into reports of Russian efforts to influence the United States presidential election.”

Even in relatively normal times, the narrow focus of the current U.S. sanctions would make the Exxon request a poor bet for government approval. “I don’t think they would issue a licence, especially given the political context in which this takes place,” ex-Treasury Department official Hal Eren told the Times, adding that waivers are rarely requested and are usually only granted for environmental or safety reasons.

Russia, meanwhile, appears to be moving on from the discussion with Exxon. “We are going to drill with Eni next year,” Zeljko Runje, Rosneft’s vice president for offshore projects, told Russian media last year. “That is our plan. On the Black Sea.”

But the IEEFA’s Sanzillo says that plan looks anything but realistic. “The reserves in questions amount to a reported 100 million barrels of oil that would require a partnership investment between Russia and Exxon of perhaps as much as $500 billion to extract,” he writes. “Exxon has already squandered (pre-sanctions) $1 billion in investor money on the partnership, which—make no mistake—promises to lose money if it were somehow allowed to proceed.”

But the company will still “want the script to focus instead on breathless speculation around the U.S. government response to the sanctions waiver request and the implications of doing business with Putin, rather than zeroing in responsibly on the fact that $55-per-barrel oil will continue to hinder profits and shareholder payments for the next few years at least.”

Although Tillerson spoke out against sanctions while he was Exxon CEO, the Times notes that he’s been critical of Russia as U.S. secretary of state, and has not publicly suggested that sanctions be lifted. He’s promised to recuse himself from any Exxon-related decisions by the Trump administration.