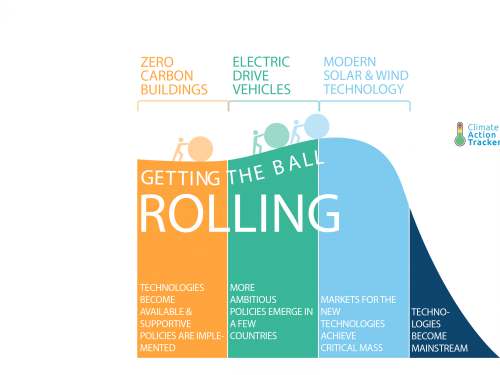 It will only take a few countries to get the ball rolling on the global transition required to meet the targets in the Paris agreement, according to a report released yesterday by Climate Action Tracker and the ClimateWorks Foundation.

That’s how renewable energy has already risen to account for more than half of new installed electrical capacity in 2015, the organizations state in a release.

“Germany, Denmark, and Spain introduced strong policy packages to encourage renewable energy, providing signals to investors and developers to invest in the new technologies,” said lead author Markus Hagemann of NewClimate Institute. “Next came the UK and Italy, and then China, whose bulk manufacture—especially in solar technology—provided economies of scale.”

The policies those early movers put in place made a big difference, noted Andrzej Ancygier of Climate Analytics. They included “strong financial support schemes such as feed-in tariffs, as well as mid- to long-term renewable energy targets,” he said in the release. “These gave certainty to investors and triggered the massive growth and price drops we see today.” The initial push led to “widespread application”, with 146 adopting their own policies by 2015.

And now, “the same formula can be applied to electric cars,” said Sebastian Sterl of NewClimate Institute. “While they have further to go than renewable energy, all the signs are there for the decarbonization of this sector to take off. Again, we find this change was started by just a few key players, this time Norway, the Netherlands, California and, more recently, China.” The study points to the building sector as a laggard, with proven technological solutions that have been “applied primarily at the margin and in niche markets.”

So far, “single countries and a diverse set of actors within them taking action in parallel has, in some sectors, led to dynamics that are shifting global markets,” states a two-page synopsis that accompanied the release. Now, “one way to speed up technology deployment are ‘transformative coalitions,’” in which “countries and sub-national actors interested in advancing a particular low-carbon technology can work together to create similar market dynamics.”