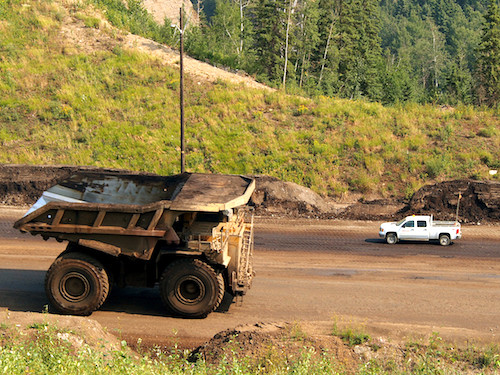 One of the most iconic images of the Alberta tar sands/oil sands is the huge, multi-storey yellow dump truck carrying raw bitumen from an open-pit mine to an extractor to have its crude oil stripped out. The behemoths provide hundreds of the region’s best-paid driving jobs. But new technology from the likes of Tesla, Google, and Apple may soon do away with the drivers, though not the trucks.

The trucks are big, but they follow very predictable routes with almost no traffic, JWN Energy notes, citing a study by CIBC. They don’t go fast, and they’re big enough to track easily with a variety of sensors. In short, they’re almost perfect candidates for the self-driving technology that’s being proven by rival technology giants in the comparative chaos of southern California freeways and Chinese mega-cities.

Hard rock miner Rio Tinto’s 2015 annual report revealed that it cut its operating costs by 13%, and raised asset utilization by 14%, after replacing drivers with 71 self-driving trucks, the fossil industry news outlet reports. Suncor Energy “is currently operating a test fleet of autonomous haulers at its base oilsands mining project, [while] every truck that Suncor is adding or replacing in its fleet has the ability to go fully autonomous.”

In 2012, Quartz reported that annual earnings for drivers of all types of trucks used in tar sand/oil sand operations could reach as high as $170,000. But for tar sands/oil sands operators searching for profitability with crude oil stuck persistently in the US$50 per barrel range, “on a scale of one to 10, with 10 being commercial, CIBC believes autonomous hauling would be a 10, and implementable immediately,” the bank’s analysts note.