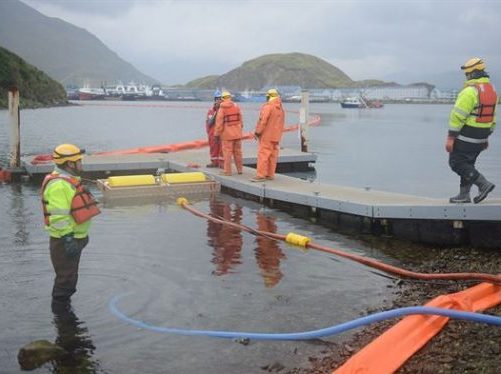 The grounding of an American tugboat off the central British Columbia coast last October, releasing 100,000 litres of diesel fuel into the water, did lasting damage to traditional food sources and shone a light on continuing shortcomings in governments’ response plans, a report has found.

The Nathan E. Stewart was pushing a barge with capacity for up to 2.2 million gallons of oil when it went aground in Gale Passage. Fortunately, the barge was empty, but some of the tug’s fuel leaked into the sea.

The review by the Heiltsuk Nation, in whose territory the incident occurred, “highlights delays in equipment arriving to the site, delays in deploying booms, and an insufficient number of booms being made available,” DeSmog Canada reports. “Heiltsuk members who acted as first responders were not provided with any safety equipment or briefing on the health impacts related to the exposure to diesel.”

The Stewart was not removed from the water for a month. The site of its grounding, DeSmog notes, “is an important harvesting and ceremonial site and a ‘breadbasket’ of the Heiltsuk community,” which has remained closed for clam fishing since the spill.

Despite repeated commitments from both the Canadian and British Columbia governments to provide a “world-class” response to marine spills on the west coast, “nothing has changed since this spill,” Heiltsuk Chief Marilyn Slett said. “As it stands today, if something was to happen, we’re still under the same spill response regime.”

To judge by her community’s experience, Slett added, “a real spill response regime does not exist.”

That verdict is widely shared among other Canadians. Even before the Nathan E. Stewart incident, only about one in four trusted the federal government to respond adequately to oil spills. Author Andrew Nikiforuk has argued persuasively that, in fact, no response tactic “has ever been effective in containing large spills” at sea.

Canada’s Transportation Safety Board is also investigating the grounding, but has yet to issue a report.