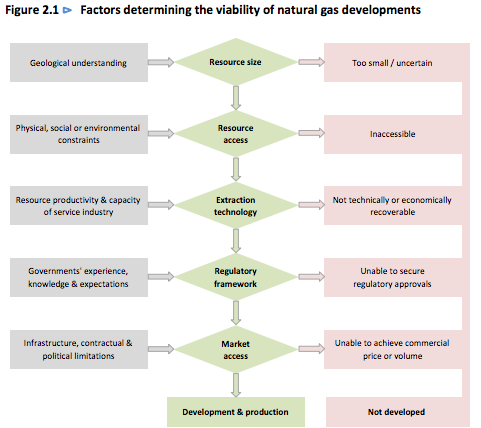 More than half a decade after the International Energy Agency first suggested the possibility, “this ‘golden age of gas’ has not really materialized,” the IEA’s former chief analyst has conceded in a talk to a Canadian energy symposium.

The cover of a 2011 report from the International Energy Agency set its headline question against a distorted, flame-coloured map of the Middle East: “Are we entering a golden age of gas?” But “six or seven years later, we are still looking for it, and there is a glut emerging in the energy market,” said Antoine Halff, now a senior research scholar at Columbia University.

The 2011 report anticipated that “natural gas could account for more than 25% of global energy demand by 2035,” JWN Energy recalls, “in part because it could be the vital bridge for a carbon-reliant economy in a decarbonized world.” But “the argument of gas as a bridge fuel is increasingly challenged,” Halff acknowledged. “Particularly the idea that gas is a natural complement to renewables—that gas can easily help renewables get integrated to the grid and deal with the intermittency of normal energy production.”

Thanks to the falling cost of battery storage and improved grid management, he said, “that argument is becoming less compelling all the time.”

Public support for gas has also been hurt by concerns over the hydraulic fracturing process used to recover it, Halff noted. Meanwhile, he said climate policies haven’t pushed carbon prices high enough to make a consistently strong case for gas over competing fossil fuels, notably coal. Of a score of countries with carbon prices, “in 75%, the price is under US$10/ton, and that’s not really sufficient to move the needle.”

Although it didn’t emerge in JWN’s account of the former IEA analyst’s remarks, another factor in punctured expectations for a gas ‘golden age’ has been the deepening cost competition from renewable energy sources such as photovoltaic solar generation.