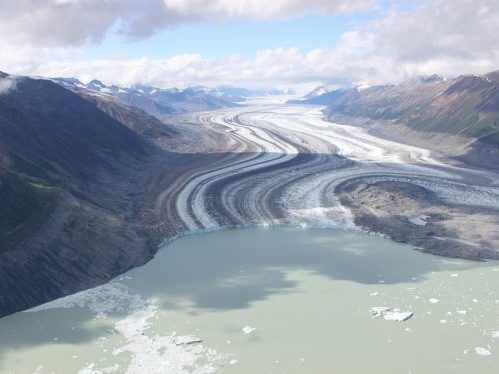 The first-ever modern case of “river piracy” hit the Yukon’s Kluane River last May, according to a report published this week in the journal Nature Geoscience, when the territory’s Kaskawulsh Glacier retreated so quickly that its meltwater abruptly, and likely irreversibly, switched direction.

No Jolly Roger was involved. But while evidence of the phenomenon is common in the geological record, “this was the first event where river piracy occurred right under our noses, and due to contemporary climate change,” said lead author Dan Shugar.

“Instead of flowing into the Slims River and then north to the Bering Sea, the water has changed course and now flows south toward the Gulf of Alaska and the Pacific Ocean,” CBC News reports. “Where previously the glacier had melted into two ponds and then flowed into the Slims, the melt-water had carved a new 30-metre canyon through the glacier towards a lower elevation.” River gauges recorded “an abrupt drop in the water level” of the Slims “in just four days between May 26 and May 29, 2016,” while water in the Alsek River, which flows south rather than north and west, has risen.

Shugar’s colleague James Best described the change in the Slims River delta on Kluane Lake as “absolutely astonishing. Where there had been blue, shimmering shallow water, it was now exposed sediment, and it had dried out. The afternoon wind in that area was picking up that sediment and creating a huge dust storm.”

The abrupt event caught the attention of world media. “An immense river that flowed from one of Canada’s largest glaciers vanished over the course of four days last year,” the Guardian exclaimed, “in an unsettling illustration of how global warming dramatically changes the world’s geography.”

In an extensive report on “the first case of large-scale river reorganization as a result of human-caused climate change,” the Washington Post underscored the potential consequences for 70-kilometre-long Kluane Lake, Yukon’s largest.

Water in the lake, which is usually up to 76 metres deep, was at a record low when researchers visited in August, “and is likely to continue dropping,” Shugar said. “If it drops enough that the lake level is below its other outlet, at the north end, it becomes what is called a closed basin. That will [lead to] changes to the chemistry, the structure of the lake, the biology.”

Two lakeshore hamlets, the Post added, “may now have to adjust to [permanently] lower water levels. Researchers do not expect the glacier and the river system that depends on it to flip back.”

Said Shugar: “We did some preliminary estimates of what it would take for the Slims River to be re-established, and it seems unlikely to occur in the current climate.” An earlier study in the same scientific journal predicted that western Canada will lose 70% of all its glaciers by 2100.