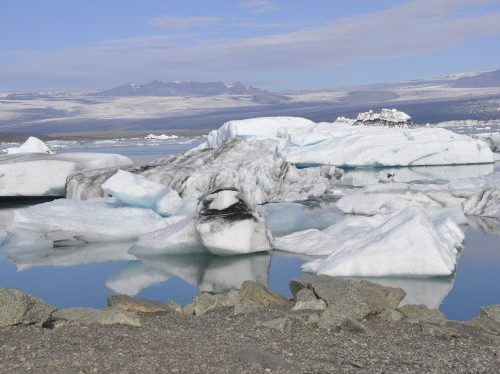 Arctic permafrost is melting much more widely than previously estimated, while portions of the Arctic Ocean are beginning to resemble the North Atlantic’s much warmer temperature profile, according to separate research studies published last week.

A paper in the journal Nature Climate Change found that “more than 40% of the world’s permafrost—landscape covered in frozen soil—is at risk of thawing, even if the world succeeds in limiting global warming to the international goal of 2.0°C,” Inside Climate News reports. An area twice the size of Alaska, California, and Texas combined is at risk of thawing—and the difference between average global warming of 1.5° and 2.0°C is an expanse of about two million square kilometres, a team of Swedish, Norwegian, and British researchers concluded.

The researchers didn’t estimate how much the thawing permafrost would increase the release of greenhouse gases. But a 2015 study, based on earlier melt projections, calculated that thawing permafrost could release up to 92 gigatons of carbon into the atmosphere by 2100—in turn triggering accelerated thawing in a pernicious feedback loop.

“Permafrost contains vast amounts of carbon in the form of plants that died since the last ice age and have remained frozen rather than decomposing,” InsideClimate explains. “When permafrost thaws, this long-trapped carbon is released into the atmosphere, further propelling future warming.”

Changes in the Arctic Ocean, meanwhile, are creating a different but equally troubling feedback. In the past, a vast pool of relatively fresh water spread over the ocean’s eastern area, somewhat insulating its surface ice from a deeper layer of warmer, saltier water originating in the Atlantic.

These stratified layers have been weakening “since the 1970s,” Climate Central notes. Since 2013, “the cap separating the deep water and surface water disappeared completely in some locations, allowing the warm Atlantic waters to reach the surface and cut further into sea ice pack. At the same time, warm air has further reduced sea ice, which is allowing still more mixing of the ocean layers.”

As the bright, white sea ice recedes, the dark sea water is more exposed to the summer sun, warming the water and increasing the global temperature.