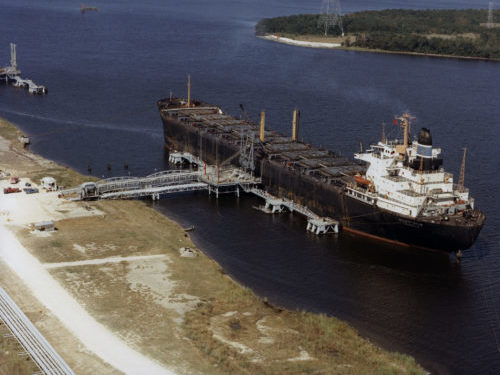 While the declining volume of surplus oil floating around in tanker ships is leading the fossil industry to hope for a recovery in global oil prices, at least one analyst sees a brief rebound as just another step in the “very long future decline of oil.”

The term “floating storage”, indicating a full tanker that has been docked at port for at least a week, has gained cachet in the fossil industry since oil prices began crashing in the latter part of 2014. Now, a research report from GMP FirstEnergy says those stocks were drawn down in the first three months of this year, bringing enough new product into the market to offset OPEC supply cuts intended to drive up prices.

“With much less floating storage readily available to act as a source of backup supply, the production cuts should begin to have a more immediate impact on second-quarter 2017 global oil balances, and going forward for the remainder of the year,” FirstEnergy analysts wrote.

“These developments suggest a more bullish spin for crude oil prices, as global inventories should begin to decline in earnest with the ramp up of the refining season and result in faster and deeper inventory draws over the course of 2017, including stubbornly high U.S. oil inventories.”

But a temporary shift in oil prices would only mask a bigger set of problems, Texas-based reservoir engineering and management consultant Dwayne Purvis writes for OilPrice.com. Global oil demand is expected to grow at 1% or less in the years ahead (far less, if countries intend to meet and exceed their Paris targets—Ed.), competition from renewables and energy efficiency will make it hard for the industry to predict future markets, and investment has fallen off sharply—so fossils may not be in a position to respond, even if demand looks likely to grow.

That lack of investment is expected to lead to shortages in the early 2020s that would drive up oil prices. But “markedly higher prices, should they arrive, could provide the last push on top of underlying decay,” Purvis warns. “Producers may rush into development even as consumers back out of use. If supply increases while demand plateaus or declines in absolute terms, then the oil industry will see the worst down cycle in memory.”

More broadly, with fossil demand permanently stalled or declining, Purvis says the only option will be “to plug high-cost production and to redirect large portions of investments.” Future supply gluts will be resolved by further production cuts, with the result that “booms will be shorter, and the busts may be longer.” Ultimately, “the public markets will no longer value companies for their growth stories in oil. Growth for energy companies will come instead from natural gas, which will be a global commodity by that time, or from alternative energy sources. Those who stick with liquid hydrocarbons will be treated like the natural gas companies of recent years—out of favour and focused on margins.”

TrumpWrap: Critics Declare Climate Policies an Affront to Science, an ‘Embarrassment’ to the U.S.