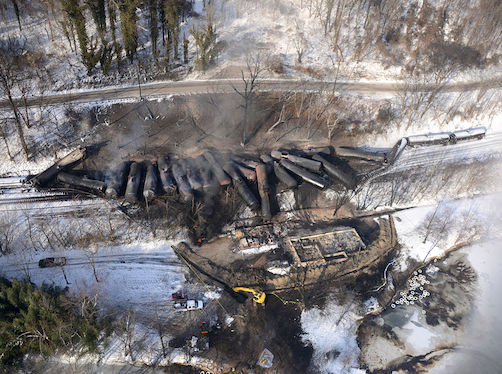 Rail defects similar to those blamed for fiery derailments in several U.S. states have been documented by federal inspectors at 24,000 locations along America’s 140,000-mile rail network—roughly once in every six miles of track—the Associated Press reports.

The inspectors checked railroads that haul tanker trains loaded with “volatile crude oil” of the type that exploded in Quebec in July, 2013, incinerating downtown Lac-Mégantic and killing 47 people. The problems they identified “included worn rails and other equipment; bolts meant to hold tracks in place that were broken, loosened or missing; and cracks in steel bars joining sections of track. They also noted failures by railroads to quickly fix problems identified through inspections.”

Many were “similar to those blamed in derailments that triggered massive fires or oil spills in Oregon, Virginia, Montana, and elsewhere,” AP reports. “In Lynchburg, VA, cracks in the track that went unrepaired led to a[n] oil train coming off the rails and exploding along the James River in 2014. In Culbertson, MT, a 2015 accident that spilled 27,000 gallons of oil from a BNSF Railway train was blamed on defective or missing fasteners used to hold the tracks in place. And in Mosier, OR, broken rail bolts were blamed in a Union Pacific oil train derailment and fire last year.”

The derailment in Lac-Mégantic was not, in fact, blamed on faulty rails, but on a combination of crew inattention and brake failure. Nevertheless, the ongoing occurrence of “apocalyptic” derailments of so-called “bomb trains” loaded with highly volatile grades of crude oil continues to focus critical scrutiny on the practice.