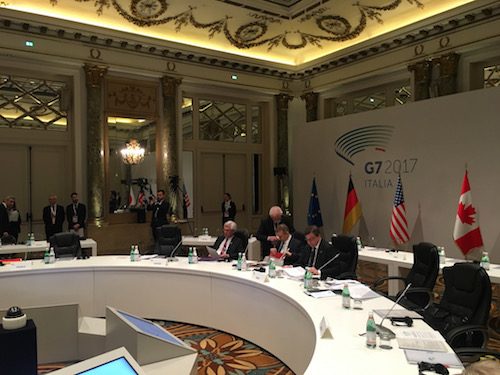 United States Energy Secretary Rick Perry tried to stall the show this week and ended up isolating his country among most of the world’s most powerful industrial economies, by refusing to state a position on energy and climate change during a meeting of G7 energy ministers in Rome.

With Perry begging for more time for the Trump administration to declare itself on climate change and the Paris agreement, “it was not possible to sign a joint declaration,” Italian industry and energy minister Carlo Calenda told a news conference. “While this is under way,” he added, “the United States reserves its position on these key priorities.”

But rather than letting Perry derail the meeting, European, Canadian, and Japanese energy ministers issued a “full-throated affirmation of the Paris climate agreement,” E&E News reports [subs req’d]. In lieu of a unanimous statement, “the Italian presidency opted for a less formal chair’s summary to express the majority’s views, with the exception of Perry, about the ‘historic’ Paris Agreement.”

“The other Heads of Delegation reaffirmed their commitment towards the implementation of the Paris Agreement to effectively limit the increase in global temperature to well below 2°C [degrees Celsius] above pre-industrial level, to pursue efforts to limit the temperature increase to 1.5°C, encouraged all Parties to ratify the agreement, and reaffirmed their commitment to accelerate the decarbonization of the energy sector,” Calenda’s summary affirmed.

Citing “a source close to the G7 talks,” Reuters said Perry’s inability to commit “showed the isolation of the United States at the ministerial meeting.”

That tenuous position may have been deepened by Perry’s overt pitches for the fossil fuel industry so widely represented in the administration for which he speaks. According to industry blog Fuelfix.com, Perry delivered a variant on a long-standing, increasingly challenged fossil sector talking point that “renewables will have an important role, but traditional sources are still needed for energy and economic security into the foreseeable future.”

Perry also told his G7 peers the Trump administration is “committed to developing, deploying, and commercializing breakthrough technologies and the necessary policies that will help renewables become competitive with traditional sources of energy.”

Perry’s remarks suggested he has missed the reality, widely understood in the utility world, that renewables are already more than just “competitive with traditional sources” of fossil energy. Not to mention the multiple estimates from well-qualified research centres that confirm the feasibility of a 100% renewable economy well within the “foreseeable” future.

E&E raised the question of whether the energy ministers would issue a similar, consensus-free communiqué if the Trump administration eventually decides to abandon the Paris accord.

“That’s a last resort,” said Alden Meyer of the Union of Concerned Scientists. “No one will want to go there, because that just shows there’s an obvious split.”

But John Kirton, co-director of the University of Toronto’s G20 Research Group, said the energy ministers were “successfully holding the line” by reiterating most of the language they adopted at their 2016 meeting in Japan. “Had it been a collective communiqué, it probably would have said to the world all of the G7 is willing to compromise on everything to accommodate all of the particular campaign statements and presidential tweets” of Donald Trump, he told E&E.

“My take on this is that no communiqué is better than a poor communiqué,” agreed Liz Gallagher, senior associate at Third Generation Environmentalism Ltd.