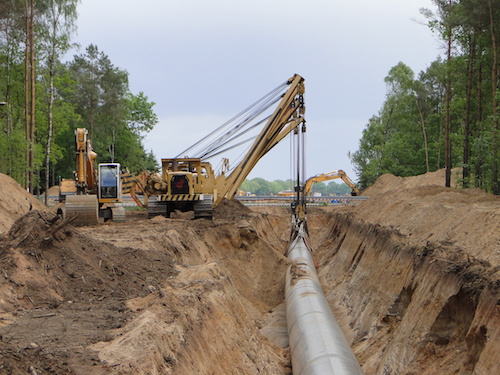 British Columbia has signed off on its January approval of Houston-based Kinder Morgan’s request to triple the capacity of its Trans Mountain diluted bitumen pipeline from Edmonton to Vancouver Harbour—but only if Kinder confirms its commitment to the project within 85 days.

The April 6 deal between the company and the government of Premier Christy Clark, which has received hundreds of thousands of dollars in political donations from Kinder Morgan and associated figures, gives the project tentative approval, Canadian Press reports. But it requires Kinder to reach a final investment decision by June 30, and communicate that decision to the government no later than July 2, for the project to go ahead.”

Former premier Michael Harcourt has warned that governments will spark “insurrection” in the vote-rich Lower Mainland region of B.C. if the project goes ahead. Clark faces a general election May 9.

But Kinder Morgan’s decision may rest more heavily on economics. The price of oil has fallen drastically since the company initially proposed the pipeline, and its Canadian president concedes its cost will exceed estimates. Kinder also faces several lawsuits challenging the project.

Against those factors, a company spokesperson suggested in a statement that Kinder Morgan has not yet secured the financing it needs to build the pipeline. “Next steps for the project include arranging acceptable financing,” the statement said. While acknowledging the June 30 deadline, the unnamed spokesperson said no date had been set for the company’s board to meet to consider the final decision.

Nonetheless, New Democrat MP Kennedy Stewart, whose Burnaby South riding is in the pipeline’s path, says he has been fielding calls from alarmed property owners. “People have been getting visits from Kinder Morgan land agents, there has been surveying on property, and they are now starting to get official letters saying that ‘we will be visiting you to talk about how we’re going to put this pipeline through your property,'” Stewart told the National Observer.

The “federal government has given the Texas-based Kinder Morgan a ‘right of entry’ onto the property it needs to build the new pipeline,” the Observer notes. Citing Kennedy, however, it calls this “the same thing as expropriating their land.” Affected owners have limited windows in which to raise objections with the federal pipeline regulator, the National Energy Board.

The province’s shotgun agreement with the American company, CP notes, “also includes a policy requiring the company to consider hiring B.C. businesses and First Nations first for the construction and maintenance of the project within the province.” But those business arrangements will only be “prioritized if they meet Kinder Morgan’s requirements for safety and expertise, offer competitive pricing, and aren’t at odds with the company’s existing obligations.”