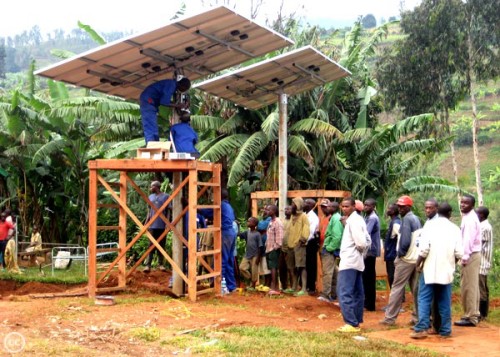 New wind and solar projects in 21 African countries could exceed the continent’s entire demand for electricity by 2030, according to a new mapping study published in the Proceedings of the National Academy of Sciences (PNAS).

“Well-chosen sites together with interconnectors that allow resources to be shared between countries suggest Africa’s rapidly growing electricity demand could be met with renewable sources at a similar cost to conventional fossil fuel generation,” Carbon Brief reports.

The report was released to coincide with this week’s Sustainable Energy for All Forum in New York City, which also heard that only 37% of Africans had access to electricity as of 2014. A World Bank/International Energy Agency report concluded that most people living without electricity are in rural areas, “where the race against demographic growth is largely being lost.” Rural Africa accounted for 45% of the 1.06 billion people around the world with no electricity access; African cities added another 10%.

Africa also has the lowest per capita energy consumption in the world, but the PNAS study looked at one part of the continent, encompassing about 600 million people, where demand is on track to triple between 2010 and 2030. The resulting total, about 1,000 terawatt-hours, would be three times the energy consumption of the United Kingdom, on a par with Russia or India.

But “based on the quantity and quality of the resource (ie. wind speed, sunshine hours), together with other human and physical markers of suitability (eg. slope, elevation, temperature, population density, proximity to transport links), the maximum possible potential for wind and solar power across all 21 countries outstrips projected demand in 2030 by at least a factor of two,” Carbon Brief reports.

The report notes that available wind and solar resources are “unevenly distributed between and within countries,” and that the grid interconnections that would be needed to deliver the power “are typically designed for conventional and hydroelectric generation.” But the study result “pushes back against the argument that coal is the solution to poverty and lack of access to electricity in Africa,” reinforcing the evidence that distributed energy costs less and carries fewer social and economic pitfalls.

“Unless it’s a totally unique case—and I don’t really know of any right now—the clean is beating the coal, except for some backwards-looking analysts who are looking at what was the economics of renewables a decade ago,” said UC Berkeley energy professor Daniel Kammen. “The paper also makes the point that investments should not be considered in isolation, and that solar and wind resources need to be planned alongside the development of hydropower and other resources,” added World Bank senior energy specialist Oliver Knight.

California Methane Controls May Point the Way for Mexico