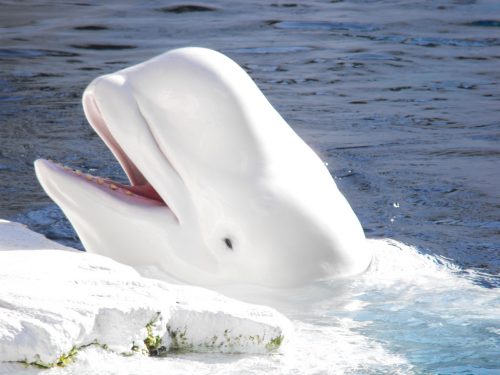 A beleaguered clan of beluga whales faces a new threat in Alaska’s Cook Inlet, where a second mid-20th-century pipeline appears to have sprung a leak, releasing oil into water already contaminated by high levels of methane pouring from a line nearby.

Hilcorp Alaska reported the spill April 1. “At first, I hoped that news of this latest oil leak was an April Fool’s joke, because it seemed like Hilcorp couldn’t spring another leak so soon,” said Miyoko Sakashita, oceans program director for the U.S. Center for Biological Diversity. The previous leak has been releasing methane into Cook Inlet since December, at levels that scientists say endanger fish life there and which already posed a threat to the Inlet’s 340 remaining resident belugas.

The two pipelines were built in the 1960s to connect gas and oil production platforms named Anna and Bruce. Both are eight inches in diameter and have lain 75 feet below the highly active waters of Cook Inlet for decades. Hilcorp acquired them, InsideClimate News reports in one of several stories covering the leak—now leaks. The company’s business strategy, the outlet says, is to “acquire and exploit,” buying end-of-life oil and gas operations “in hopes of earning any remaining profits.”

But it hasn’t gone smoothly so far. “The Alaska Oil and Gas Conservation Commission,” ICN notes, “has repeatedly cited Hilcorp for violating safety regulations for its oil and gas operations in the state.”

Several oil sheens were spotted in the area on the weekend, but Hilcorp said it had “shut in” the two pipelines, and reports suggested a later survey no longer found visible oil. Even so, the Alaska Department of Environmental Conservation’s spill prevention and response director, Kristin Ryan, conceded that “we do not know if it’s still leaking,” according to Reuters.

The gas leak may not be reparable until May, when ice in the area dissipates, ICN reports. “We’re really worried about what this means for Cook Inlet belugas with the double whammy of an oil spill and gas leak in the same season,” Sakashita said. Endangered Steller sea lion and humpback whales also live in or travel the inlet.

The Center for Biological Diversity has notified Hilcorp that it plans to sue over the ongoing gas leak, and is monitoring the new oil leak to determine whether legal action is called for.