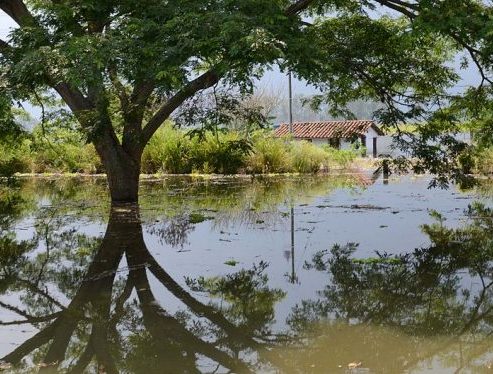 Colombia President Juan Manuel Santos declared a state of emergency Saturday after a torrent from three overflowing rivers swept through the small southern town of Mocoa, killing at least 193 people while they slept, destroying homes, and leaving at least 400 injured and 220 missing.

Santos “blamed climate change for triggering the avalanche, saying that the accumulated rainfall in one night was almost half the amount Mocoa normally receives in the entire month of March,” AP reports. “With the rainy season in much of Colombia just beginning, he said local and national authorities need to redouble their efforts to prevent a similar tragedy.”

AP recounted the horror in the provincial capital of 40,000 as water swept through the town around midnight March 31.

“Santos said at least 22 people were seriously injured and being airlifted to nearby cities, as the small regional hospital in Mocoa struggled to cope with the magnitude of the crisis,” AP notes. “Herman Granados, an anesthesiologist, said he worked throughout the night on victims, cleaning wounds. He said the hospital doesn’t have a blood bank large enough to deal with the number of patients and was quickly running out of its supply.”

Peru, meanwhile, is looking for international aid “to help hundreds of thousands of people cope with continuing floods and mudslides that have killed more than 100 people and torn apart much of the country’s infrastructure,” Reuters reports, citing an interview with Transportation Minister Martin Vizcarra.

“Peruvians displaced by raging rivers and landslides still need bottled water, canned food, tents, toilet paper, medicine, and other basics to survive the coming months,” the news agency states. But “local donations were tapering off as raging rivers and mudslides continue to slam” parts of the country.

“Every family, company has a limit to what it can give,” Vizcarra said. “But people are going to be in need for a long time. There are families that have nothing.”

CBC reports that flooding so far this year has destroyed 200,000 homes, 2,625 kilometres of roads, and 242 bridges. The government “will likely award reconstruction contracts in August or September, once heavy rains and the current crisis have subsided,” AP adds.

“Some areas have seen more rain in just a few days than they would normally receive in a decade,” CBC notes. “The result has been small rivers suddenly filling with raging torrents of water and bursting their banks.” On the coastal plain in northern Peru, the country’s second-, fifth-, and eighth-largest cities—Trujillo, Chiclayo, and Piura—have been immersed in water up to neck-deep. “Rescuers including the police and military are working around the clock to remove stranded locals from their roofs and get food, water, and medicines to isolated communities.”

Australia Surges Ahead in Solar+Storage