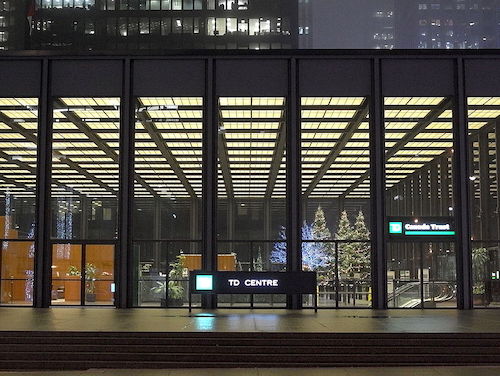 “I said don’t be naive. If you think you’re going to invest in these pipelines and you won’t see repercussions, you’re wrong,” he said. “We saw what happened with the Dakota Access pipeline and the human rights and treaty abuses of the Sioux. You won’t be able to do that here.”

TD signed on as an advisor to Kinder Morgan in February, after the pipeline received federal approval late last year. At the annual meeting, CEO Bharat Masrani acknowledged the issues Simon and LeadNow had raised.

“We understand and respect concerns raised about this engagement as well as the peaceful demonstrations that most people have used to express their views,” he said, according to a transcript supplied to the Toronto Star. He added that TD had worked to “secure an independent human rights expert to conduct a review and advise the developers on how to improve their social policies and procedures moving forward.”

But Simon cautioned that if the Tsleil-Waututh First Nation denies the pipeline access to its traditional territory, and Kinder Morgan and its partners still try to build it, they’ll face opposition from the 122-member Treaty Alliance Against Tar Sands Expansion, which Simon helped establish.

“If the Tsleil-Waututh say you’re not passing through their territory, you’d better take that as a ‘no,’ because otherwise you’ll also have a problem with the Mohawk,” he said.

“It could actually damage their brand and cost them customers,” she told the Star. “We’ve been inundated with pledges [from people] saying they will shut down their TD accounts if TD does not withdraw support for the pipeline expansions.”

When McIntosh and a colleague presented Masrani with an anti-pipeline petition containing more than 25,000 names, “one woman stood up in the meeting and asked if she could add her name as well,” she recalled.