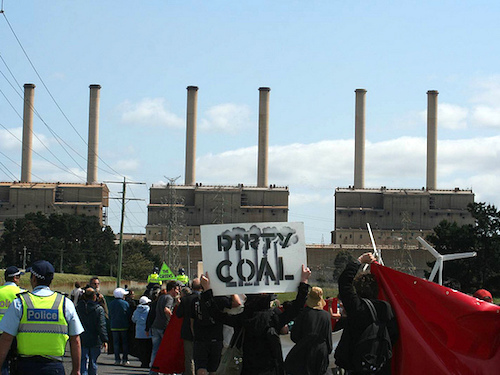 The global coal industry continued its downward spiral this week, with the massive, 1.6-gigawatt Hazelwood plant shutting down in Australia, Japan abandoning a proposed 1,000-MW facility near Osaka, and resistance growing against projects in Vietnam and South Korea.

“The shift away from coal continues,” writes CoalWire Editor Bob Burton, despite Donald Trump’s “best efforts to hold the clean energy tide back” through his executive order earlier this week. “Without doubt the Trump plan to undo Obama administration reforms on climate and energy policy has pleased coal companies and their lobbyists. However, there is no denying the structural challenge to coal power.”

The long-awaited Hazelwood closure March 29 “raises the question of whether the transition from coal power will be fast enough to avoid the worst risks to climate,” CoalWire reports. “There is also a need to plan ahead for a just transition to sustain regional communities.” But RenewEconomy marked the occasion by describing the plant as “the latest and the most powerful symbol of the vast and rapid change in our energy system.”

Just a day after the closure, “a new $1-billion solar PV and battery storage plant was being unveiled for South Australia, with its proponents insisting that construction would begin later this year,” the New South Wales-based daily notes. “On top of that, the former boss of Hazelwood, Tony Concannon, had announced that the combination of solar and storage was already cheaper than baseload gas plants, and would therefore be cheaper than any new coal generator.”

A feature article on The Conversation traces the facility’s descent from modernist icon to climate pariah. “When the brand new Hazelwood power station was officially opened on March 12, 1971, it represented a new and confident future for the Latrobe Valley region and the state of Victoria,” writes historian Erik Eklund of Federation University Australia. “Yet life in the coal heartland came with its own problems. Issues with air quality began to become evident as early as the 1970s, while the privatization of Hazelwood and the other power stations from 1996 led to 8,000 job losses. A 2004 WWF report named Hazelwood as the dirtiest power station in Australia, producing the most greenhouse emissions per megawatt of energy.”

By the time it closed, Hazelwood had become “a powerful political symbol and rallying cry” for Australian climate hawks, responsible for 3% of the country’s CO2 emissions while producing 5% of its power.

In Japan, meanwhile, TonenGeneral Sekiyu and a subsidiary of Kansai Electric Power Company (KEPCO) announced they were dropping plans for the 1,000-MW Ichihara coal plant, after the Minister of Environment rejected an environmental assessment for the project. Japan’s Kiko Network welcomed the decision, noting that a recent power supply plan had questioned the need for the facility’s output, and that public opposition was growing.

The city council in Ho Chi Minh City raised concerns about pollution from a proposed US$3.1-billion, 1.6-GW coal plant, while 1,500 people in South Korea protested plans for a 1,160-MW project in Dangjin City. “In July 2016, a decision on the plant was deferred after a week-long hunger strike by residents who also objected to pollution from the nearby 6,040-MW Dangjin plant, one of the largest in the world,” CoalWire notes.

Even in the Western Balkans, where developers are planning nine new lignite plants, CEE Bankwatch Network is warning the facilities may soon have to close—since their feasibility plans never factored in carbon pricing. “Utilities in Western Europe are closing down fossil fuel power plants on a massive scale,” writes Research Coordinator Pippa Gallop. “The main drivers for this coal phase-out have been an increase in renewable energy coupled with very low electricity prices in most parts of Europe, and to a smaller extent, having to pay for CO2 allowances under the EU Emissions Trading Scheme.”

Which points to problems for the new plants in Bosnia-Herzegovina, Kosovo, Macedonia, Montenegro, and Serbia, since the Western Balkans electricity sector is governed by the same market rules the rest of the EU adopted in 2006.

“None of this seems to have entered the heads of decision-makers in the Western Balkans, who remain wedded to producing as much electricity as possible, irrespective of the economic feasibility or impacts on the environment and climate,” Gallop notes.

“The planners assume that coal will be cheap,” she adds. “But not only is coal polluting, it is also going to get much more expensive. Environmental standards are gradually improving, which means additional costs due to pollution control equipment. And once the Emissions Trading Scheme is applied, it also means significant additional operating costs in the form of emissions allowances.”

Which means “the region looks set to find itself stuck with a fleet of new but unusable coal plants—a monument to the utilities’ and governments’ failure to change with the times.”

Another dimension of that failure is playing out in South Africa, where the government and major coal companies are shifting clean-up costs for abandoned mines to smaller businesses that can’t afford to complete the work.

“As the global market for coal slowly declines, slimmer margins are forcing international mining companies, including majors BHP Billiton and Anglo American, to shed their coal assets,” ClimateHome reports, in an exposé based on documents from South Africa’s Department of Mineral Resources. Those files “reveal a small minority of mining companies hold the majority of the country’s funds for rehabilitation. However, these big miners rarely apply for, and are almost never granted, closure certificates, the documents needed to legally close a mine and pass remaining liability to the government.”

Instead, small companies “are left with the remnants of mines and insufficient funds to properly clean up when the resource is exhausted.”

The result is a “legacy of local and global pollution,” with the country’s operational and abandoned coal mines producing greenhouse gas emissions equivalent to 900,000 cars. “Proper rehabilitation of mines includes backfilling and sealing old shafts, halting the release of carbon dioxide, methane, and other greenhouse gases,” ClimateHome notes. When that doesn’t happen, said groundWork coal researcher David Hallowes, “you’ve just got a total catastrophe in the making.”