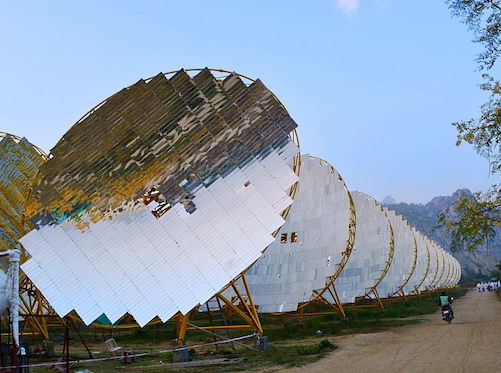 The new U.S. administration may be determined to cast its lot with the coal and pipeline industries, but a leading Canadian energy think tank is pointing to the global opportunities ahead in clean technology.

“Canada is home to numerous clean energy technology and service companies, which are cutting their teeth at home but must ultimately look abroad if they are to continue growing,” Clean Energy Canada states this week in its latest report, The Transition Takes Hold: Tracking the Energy Revolution 2017.

A global marketplace led last year by China, the United States, and India “is a major economic opportunity for Canada, a country well-positioned to develop and export clean energy technologies and services,” CEC notes in a release. “That fact was underscored in the federal budget released last week, which prioritized investing in clean energy innovation.”

“As the U.S. government retreats from international climate diplomacy, clean energy innovation, and free trade, it leaves a gap that Canada is well positioned to fill,” Executive Director Merran Smith and Policy Director Dan Wonyillowicz add in an op ed originally published in the Globe and Mail. “And it’s clear that if we don’t step up, somebody else will.”

CEC notes that the amount of new renewable energy capacity installed last year around the world rivalled the record set in 2015, even though total investment fell—a measure that the price tag for the technologies continues to shrink. Those costs are expected to drop another 26% for onshore wind, 35% for offshore wind, and 57% for utility-scale solar between 2015 and 2025, the report notes, citing the International Renewable Energy Association.

In the wake of Donald Trump’s executive order Tuesday, the Globe and Mail reported that the U.S. action would put pressure on Canada’s climate agenda, “raising concerns in Canada that domestic industries will find it tougher to compete and raise capital,” particularly in energy-intensive industries. “There have been a number of hits on the oil and gas sector, particularly, on the policy side in Canada,” said Jack Mintz, a fellow at the University of Calgary School of Public Policy and a director with Imperial Oil Ltd. “In the U.S., you have exactly the opposite.”

But where business-as-usual analysts like Mintz see risk, Smith points to massive potential for gain.

“The clean energy transition now appears irreversible. In developed and developing countries alike, fossil fuels are being beat out by renewable power that is clean, increasingly cost-competitive, and a source of economic opportunity,” she said. “China, India, the U.S., and Europe are actively seeking clean energy solutions, and Canada is well-positioned to deliver them with some of the world’s most promising clean energy technology companies.”

So far, “global growth in renewable energy remains policy-driven,” Smith and Woynillowicz note in their op ed. “But increasingly that policy is harnessing the competitive forces of the market. This approach has further driven down costs and inspired technology innovation, new business models, and market design. Competitive auctions for contracts to build new renewable energy projects are leading to record-low prices that increasingly undercut their fossil fuel competitors.”

Environment and Climate Change Minister Catherine McKenna echoed that view Wednesday, in an interview with CTV Power Play. “Businesses are looking at what are the new opportunities in renewables,” she said from New York, where she was attending the Wall Street Green Summit. “The market has moved towards renewables, towards clean growth, and businesses know that. They want the certainty, they want to make sure they’re doing the right thing, but they see the real business opportunity.”