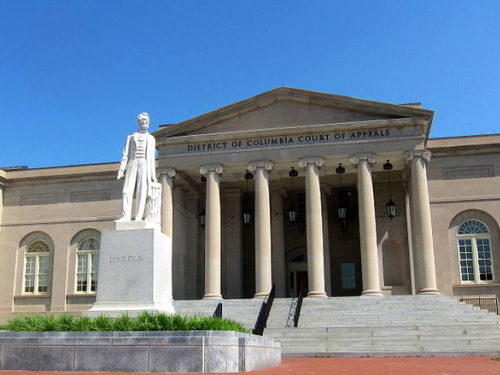 Before Donald Trump had even signed his “Energy Independence” executive order, aimed at rescinding Obama-era initiatives on climate and energy, U.S. environmental organizations and more than a dozen states were lining up to challenge it in court, while analysts questioned whether Trump had any hope of achieving the stated purpose of the exercise.

And during the media briefing the evening before the signing, a senior administration official who helped draft the order showed himself to be wholly unfamiliar with the impacts of climate change, today or in the future, according to one news report.

“C’mon fellas. You know what this is? You know what this says?” Trump told the coal miners who had joined him Tuesday afternoon at Environmental Protection Agency headquarters as a backdrop to the signing. “You’re going back to work.”

“We’re ending the theft of American prosperity and reviving our beloved economy,” he added. “The miners told me about the attacks on their jobs. I made them this promise. We will put our miners back to work.”

The announcement sets Trump off on a crusade to review and rescind a dozen or more Obama-era programs and executive orders, including the Clean Power Plan, emission standards for new coal plants, a moratorium on coal leases on federal lands, methane regulations for oil and gas operations, use of social cost of carbon metrics to guide climate regulation, and inclusion of climate change as a factor in National Environmental Policy Act reviews. It also gives U.S. government agencies 180 days to review their rules and policies for any measures that inhibit coal, oil and gas, or nuclear production.

“In taking a sledgehammer to U.S. climate action, the administration will push the country backward, making it harder and more expensive to reduce emissions,” said World Resources Institute President and CEO Andrew Steer. He added that the executive order puts Trump’s administration out of step with “U.S. companies, investors, and consumers” who see clean energy as an opportunity to deliver jobs and revitalize communities.

“This is a monumental and ill-considered mistake by Trump which will have a hugely detrimental impact on American citizens, on jobs, and on the environment,” said ClientEarth CEO James Thornton. “The vast majority of Americans understand the need to protect the environment and tackle climate change, yet the Trump administration is seeking to undo the laws which all of us—around the globe—need to protect people, the planet, and future generations. We must not allow progress to be turned back.”

“The President’s executive order launches a process explicitly designed to allow air pollution levels to go up,” noted Environmental Defense Fund President Fred Krupp. “This will allow premature deaths to go up, heart attacks and asthma attacks to go up, and sick days from work and school to go up.” He said EPA analysis points to 3,600 more premature deaths, 1,700 more heart attacks, 90,000 more asthma attacks, and 300,000 more missed work days and school days per year if the Clean Power Plan is rescinded.

“The good news is that the safeguards Trump wants to shred—like the Clean Power Plan—are on a strong legal footing, and the public will have the chance to voice its objections as the Trump administration tries to roll them back,” said U.S. Sierra Club Executive Director Michael Brune. “Trump can’t reverse our clean energy and climate progress with the stroke of a pen, and we’ll fight Trump in the courts, in the streets, and at the state and local level across America to protect the health of every community.”

Compared to Trump’s lavish promises, Kentucky Coal Association President Tyler White took a more measured view of what the executive order might accomplish. “I cannot tell you how many jobs the executive order is going to create,” he told Reuters. “I can tell you that it provides confidence in this administration’s commitment to the coal industry.”

Even the industry’s most zealous advocate, Murray Energy CEO Robert Murray, warned Trump to “temper his expectations” of a boom in coal mining jobs. “He can’t bring them back.”

And academic analysts were quick to trump the White House claim that the executive order would reduce U.S. dependence on imported fuels and revive its dying coal industry.

“We don’t import coal,” said Harvard University energy economist Robert Stavins. “So in terms of the Clean Power Plan, this has nothing to do with so-called energy independence whatsoever.”

Even if the order keeps older coal plants open for a few years longer, “the mines that are staying open are using more mechanization,” added University of Wyoming energy economist Robert Godby. “They’re not hiring people.”

Godby also showed up in a news report the day before Trump’s announcement, suggesting there won’t likely be any takers for the new coal leases the executive order promises.

“That’s because U.S. coal companies including Peabody Energy Corporation won’t be looking to secure new reserves of the fossil fuel on federal land for years, especially as mining slows amid the sector’s worst downturn in generations,” Bloomberg Markets noted. “Production in Wyoming and Montana, where much of government coal is located, fell 18% in 2016 from the prior year. Coal’s share of U.S. power generation has plunged in the face of competition from cheap natural gas and renewables.”

The result is that “no one’s looking for new coal reserves,” Godby explained. “The decline in coal demand has meant existing reserves will last a lot longer.’’

“Will it matter? Eh. Not really,” he wrote of the coal leasing announcement.

“It will do nothing for the coal miners to whom Trump has so vigorously pandered. All it may do is subsidize the future profits of a few coal company executives. Like much of Trump’s record so far, it is almost comically plutocratic policy smeared with a thick sheen of populist rhetoric.”

We’ll See You in Court

The political reaction to the executive order was immediate and fierce, with a coalition of 23 U.S. states, cities, and counties led by New York Attorney General Eric Schneiderman promising to defend the Clean Power Plan in court.

“Addressing our country’s largest source of carbon pollution—existing fossil fuel-burning power plants—is both required under the Clean Air Act and essential to mitigating climate change’s growing harm to our public health, environments, and economies,” the group declared yesterday. “We won’t hesitate to protect those we serve—including by aggressively opposing in court President Trump’s actions that ignore both the law and the critical importance of confronting the very real threat of climate change.”

U.S. environmental groups were just as emphatic. “He’s trying to undo more than a decade of progress in fighting climate change and protecting public health,” David Doniger, director of the Natural Resources Defense Council’s climate and clean air program, told Bloomberg. “But nobody voted to abandon America’s leadership in climate action and the clean energy revolution. This radical retreat will meet a great wall of opposition.”

“If the Trump Administration decides to dismantle these carbon pollution standards and then either chooses not to limit carbon pollution from power plants, or chooses to do it in a way that is ineffective and weak, then, yes, you can expect to see challenges,” said Sierra Club attorney Joanne Spalding. The first legal clash will come if the Trump administration tries to walk away from the EPA’s defence of the Clean Power Plan against a challenge from 24 states—led by Oklahoma’s climate-denying ex-Attorney General, EPA Administrator Scott Pruitt.

“We’re anticipating that the Trump administration will now file some sort of motion with the court asking the court to not decide these cases,” Spalding told Climate Central. “So we plan to oppose that.”

Several analysts and critics said it would take months or years for the results of the executive order to play out. “It doesn’t actually do anything,” according to Stanford Law School energy and environment specialist Michael Wara. “What it sets in place is a process to review the rules promulgated by the Obama administration.” In that sense, “it’s a more cautious and well thought-out executive order than the ones we’ve seen from Trump so far.”

That reality sets up a series of distinct actions that will be open to legal challenge. “As destructive as it aspires to be,” Doniger wrote yesterday on the NRDC Expert Blog, “Trump’s executive order cannot erase Clean Air Act standards and other climate protection rules by itself. Scott Pruitt and the president’s other minions must follow the rule of law. They can tear down these regulations only using the same legal process it took to build them. Their final decisions must pass muster in the courts.”

“We will fight them every step of the way,” he adds. “We’ll win because the law, the science, and public opinion are on our side.”

“This executive order is part of a much broader assault on Obama-era climate policies,” notes Vox.com’s Brad Plumer. “Overturning everything Obama has done on climate will be difficult, however. Some rules, like the fuel economy standards, can only be weakened—not killed entirely. Other regulatory rollbacks may get thwarted by federal judges. And Congress will have final say over the EPA’s budget, with even some Republicans now balking at the steep cuts Trump has been mulling to clean energy programs.”

But, “what Trump can do,” he adds, “is halt any momentum that may have been building toward deep decarbonization. If we want to halt climate change, it’s not enough for U.S. emissions to continue to drop slowly or flatline. They have to drop dramatically. That would’ve been a huge challenge even if Hillary Clinton had been elected president—she was mainly planning to expand some of Obama’s EPA programs at the margins. But it now looks extremely unlikely under Trump.”

Which makes it all the more troubling that the senior administration briefer at the Monday evening media session seemed unversed in the most basic research on climate impacts. Mashable recounts the Q&A verbatim.

Q: What about all the scientists who are saying climate change is going to have adverse economic consequences—things like rising sea levels, more hazardous hurricanes—how do you address those economic arguments?

SENIOR ADMINISTRATION OFFICIAL: Again, you’ll have to talk to those scientists. Maybe I can talk to you afterward. I’m not familiar with what you’re talking about. But again, the President’s policy is very clear about addressing—making sure we’re addressing the economy, providing people with jobs, and we’re making sure that EPA is sticking to its core mission.

Q: Are you saying you’re not aware that scientists are concerned about rising sea levels or how more violent storms might impact the economy…

SENIOR ADMINISTRATION OFFICIAL: I would want to see the research. Sure, that would be good. Show it to me.

“To say the least, it’s absolutely astounding that the White House wasn’t aware of the research showing the damaging effects of climate change before it decided to roll back historic regulations,” writes Science Editor Andrew Freedman. “It’s also not quite believable,” given an exhaustive research base that Freedman briefly surveyed in his reaction piece.

“The bottom line is that waiting to tackle climate change is the most expensive option, and the one that could ultimately hurt, not help, job creation,” he notes. “But the White House apparently didn’t know that until a reporter brought it up.”