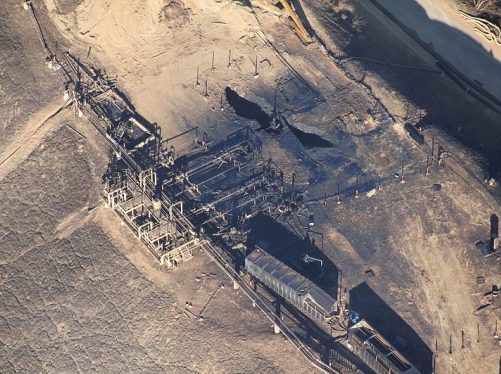 The California Air Resources Board (CARB) voted unanimously last Thursday to adopt the toughest methane regulations in the United States, striking a direct contrast with the Trump administration’s plans to reduce methane controls at the federal level.

“If the federal government won’t protect the people and the environment from oil and gas pollution, it has to be up to the states,” said U.S. Environmental Defense Fund (EDF) Director Tim O’Connor.

The new CARB rules “tighten efficiency requirements for production and transportation of natural gas and for some oil handling equipment, including installation of emissions recapture technology,” Reuters reports. “They also mandate more stringent monitoring and reporting of potential gas leaks as a means of pinpointing and repairing them quickly.”

CARB adopted the regulation more than a year after a 112-day, five billion-cubic-foot methane leak at the Aliso Canyon natural gas storage facility set a U.S. record for accidental release of greenhouse gases. “From a climate perspective, the accident was historic: One leak producing a heat-trapping effect equivalent to the annual exhaust emissions from nearly 600,000 cars,” the Washington Post reported last year. “The methane flow from one damaged wellhead more than doubled the amount of methane pollution emitted by all sources across the entire Los Angeles basin,” making it harder for the state to meet its carbon reduction goals.

While California has had the most dramatic recent history with methane, the EDF cites several states, both red and blue, moving in the same direction. Colorado, Ohio, Pennsylvania, Utah, and Wyoming are all adopting tighter control of oil and gas emissions, the organization noted in a blog post earlier this month, with Colorado leading the way in 2014 and seeing financial benefits as a result.

“A recent industry survey reveals that the majority of companies have found the benefits outweigh the costs of complying with Colorado’s methane regulations,” EDF notes. “States are seeing the job creation potential by managing methane emissions,” with hundreds of companies across the U.S. providing methane control equipment or services, and “individual companies are also realizing the financial upside of controlling their emissions. In Wyoming, for example, one operator was able to boost operational efficiencies and recoup $5 million in what otherwise would have been wasted gas by enhancing leak detection and repair practices.”

“Consider this: more oil and gas production is covered by existing or pending U.S. state regulations than what the federal Canadian regulations will cover,” writes Drew Nelson, EDF’s senior manager, natural gas. “There is enormous upside for Canada to move ahead with strong methane rules. The trend toward action among major oil-and-gas producing states, now including Ohio’s quarterly methane leak inspection requirements, is one more sign that the case for methane regulations is clear. Now it’s time for Canada to show that it won’t be left behind.”