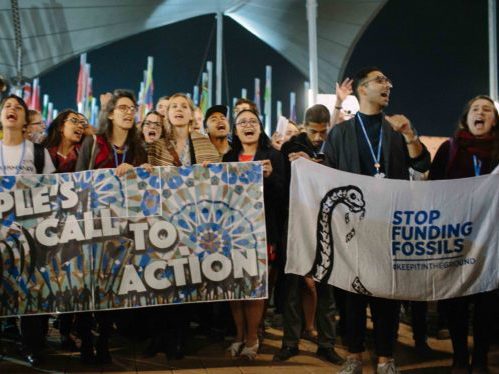 Momentum is building toward a “snap forward on climate action”, self-proclaimed planetary futurist Alex Steffen wrote earlier this month on The Nearly Now, a phenomenon that makes the Donald Trump election “the best thing to happen for climate action in years”.

It’s easy to be pessimistic—not to say devastated—at the sight of Trump populating his cabinet with climate deniers and preparing to roll back his country’s environment and climate regulations. “But I think that’s wrong,” Steffen contends. “I think Trump and his carbon cronies are not displaying strength, they’re showing enormous weakness — and not only have they not won, they’re actually doing us an unintended favour. They’re making it easier to win not the small increments of progress of the last three decades, but large-scale disruptive progress. They’re assisting in the birth of the low-carbon future.”

Steffen says he’s optimistic because the imperative for climate action “is not actually a choice”, its urgency is amping up, and the global politics of climate change have shifted as a result. “We talk about climate emissions in abstract terms, but the climate crisis isn’t causing abstract losses,” he writes. “These are real peoples’ lives being ruined, their livelihoods and businesses undermined, their governments’ funds squandered, their safety compromised, their nations’ futures threatened.” And climate impacts as far out as 2080 are no longer that distant, knowing that “little kids alive today will still be in the work force in 2080.”

The result is that “serious, responsible people take the duty of protecting those kids extremely seriously. Many are extremely motivated now to push through changes, at whatever cost.” The resulting political shift is not yet enough to complete the post-carbon transition, but Steffen cites four factors that make this the perfect moment for an “economic revolution”: the carbon bubble, the high cost of carbon-intensive systems, the accelerating shift to low-carbon prosperity, and his expectation that rapid urbanization across the globe will drive interest in “new models of zero-carbon living”.

So far, Steffen says, carbon-intensive industries in the U.S. and most other wealthy nations have “fortified themselves with political influence”, turning down “the opportunity to remake themselves into companies that could weather the coming storm of decarbonization.” But that influence is ripe for collapse.

“A carbon crash will mean a sudden loss of influence. Nobody loves bullies when they become weak, and by trashing so much hard-won progress, the carbon lobby and the GOP have completely destroyed any ethical case they might make that they deserve considerate treatment in future climate policies.”

In that sense, seeing Trump take the White House “frees us”, he writes, creating a moment when “a lot of people in clean energy and sustainable business are done playing. The GOP’s combination of blatant disrespect and scorched-earth policies has radicalized a bunch of folks who (from what I’ve seen) haven’t in the past regarded their work in particular political terms, much less as openly partisan. As the pendulum swings back on this corrupt administration, it won’t stop at the flawed climate compromises we had in 2016. I think we’re in for one hell of a fight — a fight to not only level the playing field, but to tilt it decisively towards the new economy.”

Emissions Could Rise with Greater Use of Combined Heat and Power