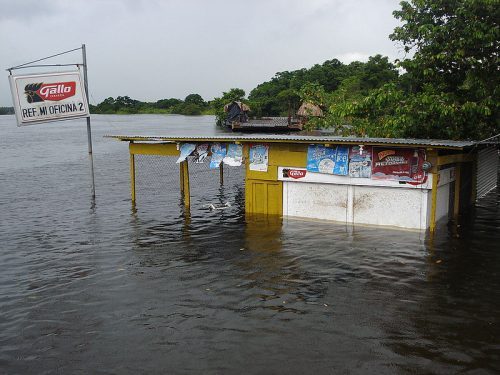 Flooding and landslides brought on by Peru’s worst downpours in decades have killed 90 people, left about 70,000 homeless, and prompted the government to declare a state of emergency.

The floods are “a wake-up call for cities across Latin America to prepare better for extreme weather as climate change and poor urban planning, alongside rapid population growth , worsen the problem,” ClimateCentral reports, in a post from the Thomson Reuters Foundation. “The disaster has highlighted the heavy human toll and economic damage floods bring, raising questions over how well prepared the region is to deal with disasters.”

Niels Holm-Nielsen, the World Bank’s regional coordinator for disaster risk management, told Thomson Reuters that wastewater infrastructure like drainage and sewage have failed to keep pace with rapid population increases and sprawling urban slums. “Torrential downpours can leave cities from Port-au-Prince to Rio de Janeiro with collapsed drains that lead to rivers of water running through city streets,” the news agency notes. “Investment is needed to unblock and maintain often outdated city drainage systems, along with ensuring rubbish is collected to prevent drains getting clogged up.”

But so far, it isn’t even clear how much Latin American governments are spending on disaster prevention. “Some elected officials are reluctant to invest in flood prevention measures because they are largely intangible for city residents, in the way new schools or hospitals are not,” Thomson-Reuters notes. So “basic protection, including early warning systems to evacuate people in time and mapping of flood plain areas, is still lacking in parts of Latin America.”

Compounding the problem, “tens of millions of people live in the region’s urban slums, often built along river banks and on precarious slopes prone to flooding and landslides triggered by heavy rains,” notes correspondent Anastasia Moloney. That includes about 500,000 in Peru who live on flood plains, according to the state water agency.