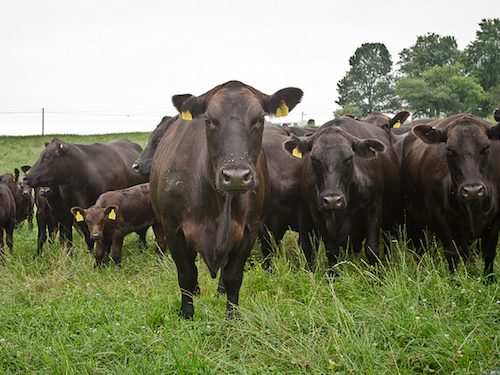 Wildfire season in the United States is off to an early and devastating start this year, with heat and high winds driving 10 times the typical level of activity for mid-March. The New York Times chronicled the impact after fires spread across the Ashland, Kansas ranch that Mark and Mary Kaltenbach had run for more than 30 years.

“Dozens of their Angus cows lay dead on the blackened ground, hooves jutting in the air,” the Times reports. “Others staggered around like broken toys, unable to see or breathe, their black fur and dark eyes burned, plastic identification tags melted to their ears. Young calves lay dying.” So “the first job after the fire passed was loading a rifle.”

“We did what had to be done,” Mark Kaltenbach said. “They’re gentle. They know us. We know them. You just thought, ‘Wow, I am sorry.’”

“This is our Hurricane Katrina,” added Aaron Sawyers, an agriculture extension agent at Kansas State University who was out on Facebook last week, calling for pressure on the U.S. Congress to free up recovery funds. “The political response to the fires convinced him that Washington, even with an administration supported by 83% of Clark County voters in the election, was still ‘out of touch and didn’t care about us,’” the Times reports.

And Sawyers, the Kaltenbachs and their herd aren’t alone. ThinkProgress traces fires, evacuations, and firefighting costs in Colorado, Oklahoma, Texas, and Kansas.

“Record-high temperatures combined with low humidity and high wind have created the ideal environment for wildfires throughout much of the Great Plains and into the West, destroying homes and property and resulting in several deaths,” reports correspondent Natasha Geiling. With two million acres affected, the U.S. National Interagency Fire Center says wildfires this year have already burned more territory than the entire fire seasons of 1989, 1993, and 1998.

Yet “emergency programs meant to help farmers and ranchers recover from catastrophic events — like the fires — are facing a 21% cut under Trump’s recently-proposed ‘skinny budget,’” Geiling notes, citing the Times report. Some ranchers “could be facing losses as high as $10 million.”

ThinkProgress points to the well-documented link between climate change and wildfires. “Rising temperatures, combined with prolonged drought throughout the West, has prompted wildfires to spread across 16,000 more square miles than they otherwise would have — an area larger than Massachusetts and Connecticut combined,” Geiling writes. “And over the last three decades, wildfire season has also gotten longer — as global temperatures have increased, wildfire season lasts on average 78 days longer.”