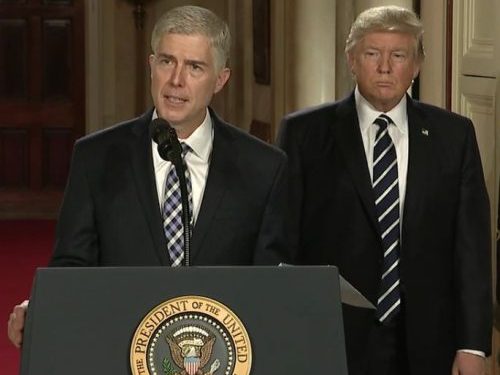 The White House postponed the anticipated signing of an executive order laying out the new administration’s climate plans until as late as next week, as the Trump White House was distracted by other files—notably links between his campaign and Russia, health care, and the Supreme Court nomination of Neil Gorsuch.

The executive order on climate policy had originally been promised for this past Monday, but now may not be released until next week. Unchanged, however, is the expectation that “the order will ask regulators to begin the process of undoing the Clean Power Plan, the [Obama] administration’s signature climate rule designed to cut power sector carbon emissions,” The Hill reported. “The order could also take aim at other climate measures—such as methane regulations or government global warming metrics.”

Even as his staff put off the release of a climate policy, however, Trump himself was assuring a rally in Louisville, Kentucky that “as we speak, we are preparing new executive actions to save our coal industry and to save our wonderful coal miners from continuing to be put out of work. The miners are coming back.” He gave no details of how that was to be accomplished, Reuters reported, in a week when three more U.S. coal plants were slated for closure.

On Capitol Hill, attention (what could be wrenched away from the spectacle of FBI Director James Comey directly contradicting the president) turned to the Senate confirmation of Neil Gorsuch, Trump’s nominee to replace the late Justice Antonin Scalia on the U.S. Supreme Court. Most focus centred on Gorsuch’s willingness to stand up to the Trump administration. But in an assessment of his record, Mother Jones found that the Colorado jurist has often “gone out of his way” to deny environmental groups standing to participate in critical court cases, and has recently “railed” against judicial deference to federal agency judgements on technical issues within their purview (the so-called Chevron doctrine).

Some factions in Trump’s party, however, are trying to address the president’s “outspoken doubts about climate change and his administration’s efforts to roll back regulation to combat it,” Reuters reported. “Conservative green groups such as ConservAmerica and republicEn, along with politically neutral religious groups such as Catholic Climate Covenant and bipartisan groups such as the Citizens Climate Lobby,” the news agency said, “have ramped up efforts to recruit more congressional Republicans to work on addressing climate change since Trump’s election.”

According to Reuters, “the various groups represent conservatives, Catholics, and the younger generation of Republicans who, unlike Trump, not only recognize the science of climate change but want to see their party wrest the initiative from Democrats and lead efforts to combat global warming.” They favour “what they call ‘free enterprise’ solutions to climate change, like a carbon tax.”

Meanwhile, adding injury to the insults that have been heaped on the former reality TV star and casino magnate since he moved into the Oval Office, Reuters cited a Forbes report that Donald Trump’s net worth had fallen “to a mere US$3.5 billion, or roughly a third of what he claimed during his campaign” for the U.S. presidency.

“Trump tumbled more than 100 spots to No. 544 on the magazine’s 31st annual list [of the world’s billionaires], largely because of the impact of the slumping New York real estate market on his holdings.”