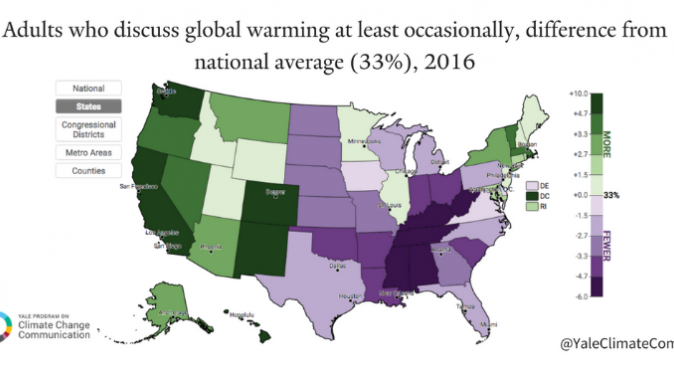 Most Americans support limits on CO2 emissions from coal-fired power plants and think climate change will likely harm their country—just not them, according to a new set of U.S. maps produced by the New York Times.

County by county, the maps show that literally nowhere in the United States do the majority of survey respondents oppose “strict CO2 limits on existing coal-fired power plants,” the Times reports. The national average of support is a robust 69%.

With exceptions in the mountain west, the corn belt, and Appalachian/Old South states, majorities in most counties also agree that “global warming will harm people in the United States.” In graphic contrast on another map, however, was the small handful of counties where more than half the people surveyed expect climate change to hurt them personally.

The last of the Times’ maps shows the counties in the United States where people say they “discuss global warming at least occasionally.” While climate is a topic in much of the west and northeast, it rarely comes up in the so-called heartland states.

Previous opinion surveys have found that 70% of Americans believe climate change is happening, and an increasing number are alarmed at the prospect. A similar percentage support the Paris agreement from which Donald Trump has said he wants to withdraw.