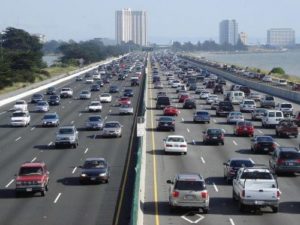 The Trump White House’s review of Obama-era fuel economy standards may not be such a bad thing if it sets out to make the rules more effective, rather than gutting them entirely, Greentech Media Senior Editor Julia Pyper suggests in an analysis published late last week.

Trump announced the review on a visit to a Michigan auto plant last Wednesday, and climate hawks pounced immediately: Sen. Ed Markey (D-MA) warned the move would “lead to costly litigation and create needless uncertainty for the auto industry”, while Tom Steyer of NextGen Climate said Trump was “choosing to poison our air and threaten the economic security of American families, just to boost the fossil fuel industry’s bottom line.”

But while the announcement “looks like major setback” on the surface, Pyper writes, “it’s possible that taking more time to evaluate the measures could lead to a more effective set of rules down the line.”

The latest Corporate Average Fuel Economy (CAFE) standards were enacted in 2012, after being developed by the National Highway Traffic Safety Administration and accepted by more than a dozen automakers. At the time, the parties agreed to a fleet-wide fuel economy target of 54.5 miles per gallon (mpg) by 2025, subject to an assessment in 2017 or 2018 to confirm that the target was economically and technically feasible.

“The [U.S. Environmental Protection Agency] issued a technical report last year that determined the auto industry was still on track to meet the fuel economy standards,” Pyper recalls. “After Trump was elected, the Obama administration rushed to lock in the fuel economy standards from 2022-2025, which had yet to be finalized,” giving automakers just 30 days to comment. In January, the EPA mandated a 51.4 mpg target—and that was the decision Trump rescinded last week.

And as long as CAFE standards aren’t about to disappear altogether, the non-profit advocacy group Securing America’s Future Energy (SAFE) “noted that a review could improve the existing regulations by accounting for new technologies and business models,” Pyper writes. In a statement, the group said it welcomed the opportunity “for federal regulators, auto manufacturers, the state of California, and the environmental community to collaborate toward producing a more effective regulatory framework.”

For example, Pyper says it would be helpful if the review produced greater certainty for manufacturers by aligning fuel efficiency targets in all 50 states, including the 10—led by California, and representing nearly a third of the U.S. market—that have zero-emission vehicle (ZEV) mandates. “We are hoping that as we go through this process, California will be a partner and we can figure this out,” the White House official said, “but that’s a long way down the road.”

The review could also incorporate new technologies and business models that are sweeping the auto industry, rapidly transforming the assumptions on which the last round of CAFE standards was based. “Moving toward regulating the entire mobility system over individual vehicles will increase reductions in oil demand while placing a lower regulatory burden on companies,” SAFE stated.

On the other hand, Trump’s pro-fossil and anti-regulatory predisposition has climate and energy advocates anticipating the worst out of the CAFE review, Pyper notes, and they’re not alone. “The review and subsequent pullback from EPA’s CAFE standards is a big win for automakers and workers,” said Bette Grande, energy research fellow at the Heartland Institute. “It’s also a big win for consumers, who will be able to choose the vehicles they want to drive. Finally, it is a win for oil producers and mineral owners, because when consumers are free to choose the vehicles of their choice, domestic oil demand will increase.”

She added: “So much winning, I think I’ll take my truck for a spin to celebrate.”

No doubt with that outcome in mind, Climate Progress Founding Editor Joe Romm warns that a fuel economy rollback would cost the average car buyer US$1,650, increase the country’s oil use by 1.2 billion barrels and carbon emissions by 540 billion tons over the 2022-25 model years, pull down the U.S. industry’s international competitiveness, and kill jobs.

“Trump’s misguided move to appease the ever-myopic U.S. auto industry would undo efficiency gains that will provide consumers $98 billion in total net benefits, primarily from reduced fuel use,” he writes. And “allowing U.S. car companies to keep building inefficient cars will undermine the industry’s competitiveness as the rest of the world enacts much more stringent standards that promote super-efficient cars .”