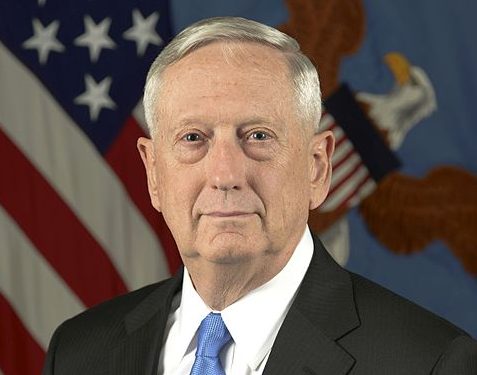 A senior member of the Trump cabinet, Defense Secretary James Mattis, “has asserted that climate change is real, and a threat to American interests abroad and the Pentagon’s assets everywhere,” veteran journalist Andy Revkin reports this week on ProPublica.

“Climate change is impacting stability in areas of the world where our troops are operating today,” Mattis said in a previously unpublished response to questions from Democratic members of the Senate Armed Services Committee, following his confirmation hearing in January. “Climate change is a challenge that requires a broader, whole-of government response,” he added, and “if confirmed, I will ensure that the Department of Defense plays its appropriate role within such a response by addressing national security aspects.”

In the Q&A, Sen. Jeanne Shaheen (D-NH) recalled that Mattis, when he was commander of U.S. Joint Forces Command, “signed off on a document called the Joint Operating Environment, which listed climate change as one of the security threats the military will face in the next quarter-century.” She asked him whether he still considers climate change a security threat.

“Climate change can be a driver of instability, and the Department of Defense must pay attention to potential adverse impacts generated by this phenomenon,” he replied.

In reply to another question, he acknowledged “that the effects of a changing climate—such as increased maritime access to the Arctic, rising sea levels, desertification, among others—impact our security situation. I will ensure that the department continues to be prepared to conduct operations today and in the future, and that we are prepared to address the effects of a changing climate on our threat assessments, resources, and readiness.”

Earlier this month, citing senior military officials, Reuters reported that DOD “plans to forge ahead under the new administration with a decade-long effort to convert its fuel-hungry operations to renewable power,” even though Trump’s chief strategy considers government support for green energy “madness”.

The military’s reasons for embracing renewables “have nothing to do with the white-hot debate over climate change,” the news agency notes. “In combat zones, green energy saves lives by, for instance, reducing the need for easily-attacked convoys to deliver diesel fuel to generators at U.S. bases. Mobile solar power units allow soldiers to prowl silently through enemy territory.”

The U.S. military nearly doubled its renewable energy generation between 2011 and 2015, and that “zeal for renewable power has already had broad impacts on energy contractors, generating hundreds of millions in contracts for solar companies and helping to reduce fuel consumption by the world’s largest single petroleum buyer.”