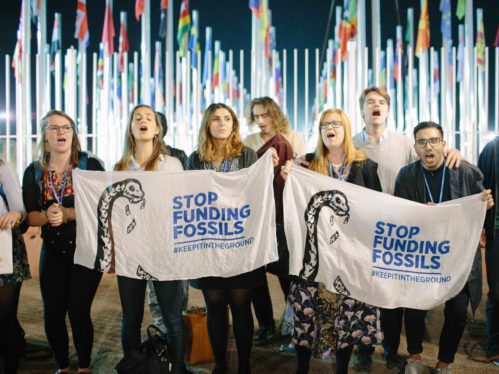 With Germany chairing the powerful G20 bloc of industrialized nations this year, Oil Change International is issuing an urgent call for support on the need for a quick, complete phase-out of fossil fuel subsidies by 2020.

“The time for talk is over,” Oil Change asserts. “We need action. It’s time to Stop Funding Fossils.”

After promising strong action on climate change through the Paris Agreement, “our governments are still handing out massive amounts of public money, making the problem much worse,” Oil Change notes. “Globally, these giveaways to oil, gas, and coal companies to produce more fossil fuels add up to more than $444 billion each year. That’s nearly $1 million every minute.” The International Monetary Fund puts the total at more than $10 million per minute.

Either way, Oil Change stresses, “we need real ambition: We must end these subsidies by 2020 at the latest.” And with the G20 presidency in hand, Germany “has a chance to make that promise real by setting a firm deadline to end dirty energy handouts. If we all speak up loudly, we can give Germany’s leaders the public backing they need to act.”

Earlier this year, Oil Change reported that about 45% of U.S. oil production “depends on government handouts to make it profitable,” based on a study by SEI and EarthTrack. “That means taxpayers are footing the bill for some of the most wealthy and powerful companies to survive and prosper—and trash the planet and our democracy in the process,” the research and advocacy organization stated at the time.