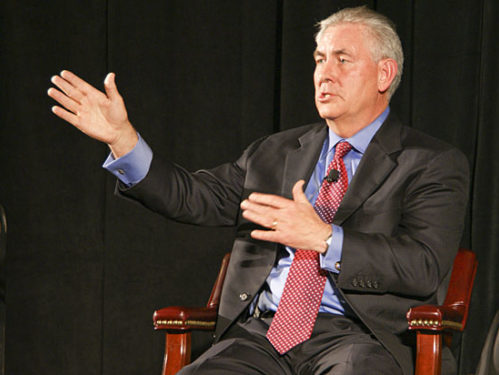 For at least eight years as chief executive of ExxonMobil, Rex Tillerson, now the U.S. Secretary of State, corresponded about the risk that climate change posed to his company by email under the name Wayne Tracker, investigators for New York Attorney General Eric Schneiderman revealed this week.

“Investigators say the company concealed the emails despite a 2015 subpoena for Tillerson’s communications,” InsideClimate News reports. The subpoena was issued as part of the New York attorney general’s investigation into whether Exxon committed fraud by failing to disclose its long-standing knowledge about climate change to investors and regulators. “The company has turned over a handful of the [Tracker] emails, but New York authorities believe a much larger trove exists.”

The latest revelation came in a letter to the court, released to the media by Schneiderman’s office. According to InsideClimate and other outlets, it “accused Exxon of failing to turn over all relevant documents” covered by the 2015 subpoena, asked for any as-yet undisclosed ‘Wayne Tracker’ emails to be turned over, and demanded to know whether any other top Exxon executives had maintained secret email accounts under aliases.

Investigators said they grew suspicious recently when they came across a reference to the Wayne Tracker email account in 60 of more than 400,000 documents that Exxon had supplied. The company concedes the email alias account existed for Tillerson’s use. “The email address, Wayne.Tracker@exxonmobil.com, is part of the company’s email system and was put in place for secure and expedited communications between select senior company officials and the former chairman for a broad range of business-related topics,” said Exxon spokesman Alan Jeffers.

Tillerson, whose middle name is Wayne, was confirmed as U.S. secretary of state despite concerns arising from his close relationship to Russia.