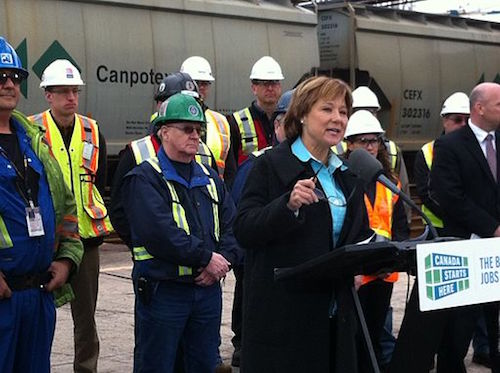 Days after activists questioned the legality of contributions by employees of Houston-based Kinder Morgan to British Columbia’s governing Liberal Party, the province’s elections oversight agency asked the RCMP to investigate those and other allegations.

The Globe and Mail initially brought to public attention that Clark’s Liberals “collected tens of thousands of dollars in multiple donations from lobbyists who paid under their own names with personal credit cards on behalf of clients and companies, and were [subsequently] reimbursed” for their donations.

The gambit was a potential violation of the British Columbia Elections Act. In the wake of the report, Elections BC opened a probe into the allegations.

A follow-up inquiry by the Victoria-based Dogwood Initiative found “a series of political donations [to Clark’s government] by staff, contractors, and lobbyists for Kinder Morgan that appear to fit the pattern” the Globe had noticed. In January, Clark’s government approved the Texas company’s proposal to more than double the capacity of its existing diluted bitumen pipeline from Edmonton to Vancouver, over bitter opposition in the province’s populous lower mainland.

Kinder Morgan’s corporate donations were among the $5.2 million that four dozen fossil companies and industry groups gave between 2008 and 2015, the Corporate Mapping Project next revealed, with more than 90% going to Clark’s Liberals. Seven of the top 10 donors also appeared on a list of top 10 fossil lobbyists. The payments were associated with “unrivalled access” to decision-makers, the non-profit project asserted, with the top 10 fossil lobbyists reporting nearly 20,000 contacts with government over that period, 14 per business day.

Last Friday, Elections BC “announced it had handed off” the donations inquiry to the RCMP to investigate, the Globe reported over the weekend. The provincial agency said it was taking the step “to ensure the investigation did not interfere with the administration of the May election.” In doing so, however, it also effectively sealed any results of the investigation from public view, until and unless the RCMP recommend criminal charges.

Meanwhile, Clark promised to introduce legislation this week requiring that political donations be disclosed “in real time,” but refused calls to limit such donations or restrict who can donate. Speaking on Monday in the provincial legislature, she promised to appoint a “panel of non-partisan experts [that] would investigate the province’s campaign financing,” the National Observer reports, but not until “after the provincial election May 9.”