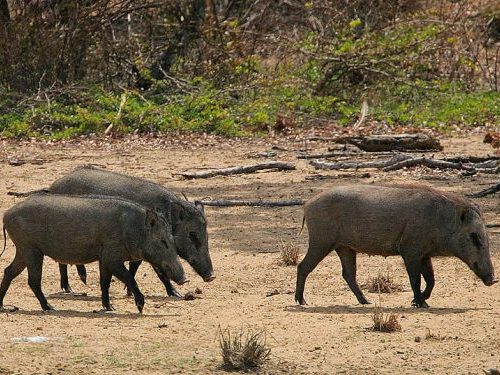 As Japanese authorities prepare to lift evacuation orders on four towns inside the 12-mile exclusion zone around the Fukushima nuclear plant, they’re running into an emblematic problem: hundreds of toxic wild boars that have been roaming the region since the facility melted down six years ago.

“They descend on towns and villages, plundering crops and rampaging through homes,” the New York Times writes in a suitably ominous news lead. “They occasionally attack humans. But perhaps most dangerous of all, the marauders carry with them highly radioactive material.”

Wild boar meat is considered a delicacy in Japan, but government testing shows these animals are too radioactive to eat, with some of them showing radioactive Cesium-137 levels 300 times above levels considered safe. “Officials have also expressed concern that returning residents may be attacked by the animals, some of which have settled comfortably in abandoned homes and have reportedly lost their shyness to humans,” the Times reports.

Whether or not the government succeeds in a campaign to cull the wild boar population, it remains to be seen whether former residents will be willing to return to Fukushima: in a survey last year, more than half said they would stay away, “citing fears over radiation and the safety of the nuclear plant,” the Times notes.

But evacuees may soon be forced to return, Greenpeace reveals, in one of several recent posts and articles marking the sixth anniversary of the March 11, 2011 disaster.

The environmental NGO has been conducting biweekly radiation surveys through the entire six years, and levels in one decontaminated area located 30 to 50 kilometres from the plant are still the equivalent of a chest x-ray per week. “And that’s assuming [residents] stay in the limited decontaminated areas,” Greenpeace notes, since 76% of the town “has not been touched and remains highly contaminated.”

But even so, the Japanese government “intends to lift evacuation orders from the village and other areas in March and April 2017, and one year later terminate compensation for families from those areas. It will also cancel housing support for those who evacuated outside designated zones. For those dependent on this support, it could mean being forced to return.”

Greenpeace reports that, six years after the disaster, Fukushima survivors “continue to live with fear for their family’s’ health and with uncertainty about their future,” and they “continue to grapple with unanswered questions, unable to relieve a deeply held sense of anger and injustice.”

The post adds that “women and children are the hardest hit by the nuclear disaster. They are physically more vulnerable to impacts of the disaster and radiation exposure. Evacuation broke up communities and families, depriving women and children of social networks and sources of support and protection. Together with a yawning wage gap (Japan has the third highest gender income disparity in the most recent OECD ranking), female evacuees—especially single mothers with dependent children—face far higher poverty risk than men.”

Contamination inside the stricken plant, meanwhile, is still several times too high for repair robots built to operate in highly radioactive environments. “The latest attempt to harvest data on Fukushima failed after a robot designed by Toshiba to withstand high radiation levels died five times faster than expected,” The Independent reports. “The robot was supposed to be able to cope with 73 sieverts of radiation, but the radiation level inside the reactor was recently recorded at 530 sieverts.”