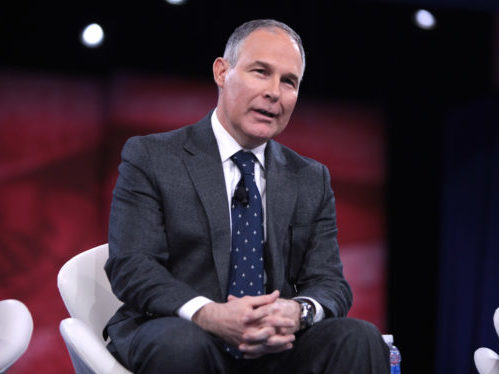 U.S. Environmental Protection Agency Administrator Scott Pruitt triggered a predictable wave of outrage last week when he expressed doubts over the settled science of climate change. But Vox climate specialist David Roberts says the uproar missed two bigger problems: The Republican Party’s deregulatory agenda, and the erosion of “shared institutions and norms that bind us together and contain our political disputes.”

Roberts writes that he could have scripted Pruitt’s remarks to CNBC last week and the wide-ranging response they produced. But “in the end, who cares what he believes? He is a functionary, chosen in part to dismantle EPA regulations on greenhouse gases. If it weren’t him, it would be some other functionary.”

The bigger problem, he adds, is the Republican Party’s wider mission to “block or reverse any policy that would negatively affect its donors and supporters, who are drawn disproportionately from carbon-intensive industries and regions. That is the North Star—to protect those constituencies. That means, effectively, blocking any efficacious climate policy (which, almost by definition, will diminish fossil fuels).”

Climate denial enters the picture because “they can’t just say that,” Roberts notes. “So they have to retrofit a set of beliefs that justify inaction on climate change.” Those beliefs vary by audience and circumstance and can be maddeningly difficult to tie down, because “the beliefs are not the point. The party’s institutional opposition to action is the point. The beliefs are retrofit, on an opportunistic and sometimes case-by-case basis, to support the conclusion, which is: do nothing.”

The second conclusion Roberts draws from the latest round of science-versus-denial is that it turns on a basic trust or mistrust of scientific institutions, not on the facts.

“When we say we ‘know’ human beings are causing climate change, virtually none of us mean we know that in any direct way,” he writes. “Most of us don’t possess the skills to analyze primary data or construct climate models. What we mean is, ‘that’s what the scientists say.’ We are implicitly appealing to the authority of scientists—of science itself.”

Trust in science isn’t unconditional—scientists’ procedures and results “are always open to democratic dispute,”—but collective acceptance of the scientific process “is how we establish a common foundation of facts and understanding, without which it is virtually impossible to have coherent political debates.” Without that basic agreement, Roberts warns, “epistemological chaos ensues, persuasion becomes impossible, and politics devolves into a raw contest of power.”

Eventually, Roberts concludes, Americans are “going to have to grapple with this crisis of authority. Until then, more facts and periodic outbursts of outrage are futile.” (h/t to Fred Heutte for pointing us to this story)