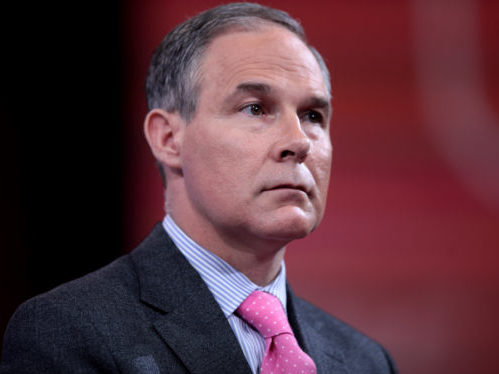 “I think that measuring with precision human activity on the climate is something very challenging to do and there’s tremendous disagreement about the degree of impact, so no, I would not agree that it’s a primary contributor to the global warming that we see,” Pruitt said. “We need to continue the debate and continue the review and the analysis.”

The Washington Post reported that Pruitt’s position “represented a startling statement for an official so high in the U.S. government, putting him at odds not only with other countries around the globe but also with the official scientific findings of the agency he now leads.” Though Pruitt, Energy Secretary Rick Perry, and the current occupant of the White House, former reality TV star Donald Trump, all have histories of denying climate change.

“The world of science is about empirical evidence, not beliefs,” retorted Obama-era EPA administrator Gina McCarthy. “When it comes to climate change, the evidence is robust and overwhelmingly clear that the cost of inaction is unacceptably high. Preventing the greatest consequences of climate change is imperative to the health and well-being of all of us who call Earth home.”

The Union of Concerned Scientists responded swiftly, with a blog post by senior climate scientist Brenda Ekwurzel that (necessarily) restated three obvious and fundamental scientific facts: that rising CO2 levels “are a primary cause of global warming”, “we have enough precision to measure human activity on carbon overload in the atmosphere”, and “we have enough precision to measure the degree of impact from human activity”.

She added that Pruitt’s “blatant denial of well-established scientific facts is more than just egregious. It is also at odds with his testimony in his confirmation hearing, and in no way changes his legal obligation to regulate carbon dioxide as a pollutant.”

But Pruitt’s impact this week didn’t begin or end with his media statements. The New York Times reported that the former EPA legal adversary had begun stocking the agency with “like-minded conservatives—many of them skeptics of climate change and all of them intent on rolling back environmental regulations that they see as overly intrusive and harmful to business,” with a number of senior staff drawn from the office of climate-denying Sen. James Inhofe (R-OK).

“To friends and critics, Mr. Pruitt seems intent on building an EPA leadership that is fundamentally at odds with the career officials, scientists, and employees who carry out the agency’s missions,” the Times noted. “That might be a recipe for strife and gridlock at the federal agency tasked to keep safe the nation’s clean air and water while safeguarding the planet’s future.”

Also this week, the Trump administration proposed a 97% cut in the EPA’s Great Lakes Restoration Initiative, and filed for a delay in Juliana v. United States, a landmark case that asserts governments’ duty to today’s youth to act on climate change. The U.S. Senate moved to repeal an Obama-era public lands management rule that favoured local community influence over oil and gas companies. And Greentech Media’s Steven Lacey encouraged Trump to listen more closely to his allies at Breitbart Radio—who’ve been making the case for clean sources of energy.