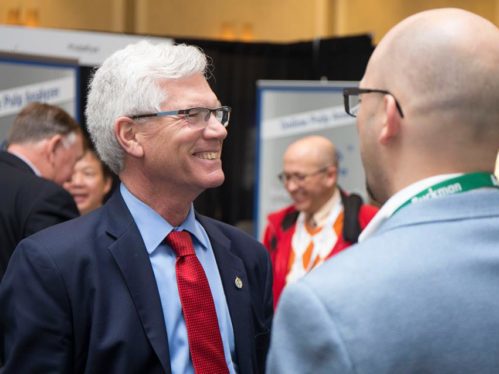 Canada is standing firm on its long-term climate and energy strategy, Natural Resources Minister Jim Carr told this week’s CERAWeek conference in Houston, even as the United States steps away from its past global leadership in the field.

“We’re at the point of generational decisions,” Carr told conference participants. “If some of us have to take a short-term political hit, I think we’ll be doing our kids a favour.”

He also “expressed some confidence that the Canadian industry will be largely unscathed by protectionist actions being bandied by the Trump administration,” the Globe adds. “Our American counterparts and friends say they understand there is a convergence of interests,” Carr said. “We’re in this together and we are going to create jobs together for people.”

Much of the Globe report focuses on concerns about Canadian fossils’ competitiveness against their U.S. counterparts and the steps they’ve taken to cut their production costs.

Thursday evening at CERAWeek, meanwhile, Justin Trudeau was to become the first Canadian prime minister to attend and deliver a keynote address at one of the world’s most influential fossil conferences. He was also to receive a sustainability award for his attempts to balance fossil development with environmental protection.

“We recognize that Prime Minister Trudeau has taken a very clear position in terms of integrating energy and environmental concerns and the way that the two interact with each other,” said veteran fossil analyst and conference chair Daniel Yergin.

“The award will highlight on a global basis what the prime minister is achieving in Canada, and what he is conveying, really, to the world community, on how to approach the challenges around energy and environment that the entire planet faces.”

Yergin added that the conference was a “very timely” opportunity for Trudeau to talk trade and investment, at a time when the U.S. administration is seeking to renegotiate the country’s trade agreements. “The words he says here in Houston will really resound around the world.”