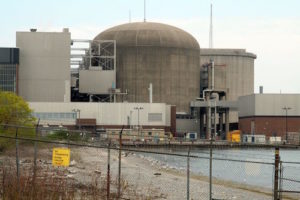 The Ontario Crown corporation that generates more than half of the province’s electricity may be driven into bankruptcy by Premier Kathleen Wynne’s decision last week to order a 17% reduction in electricity prices, on top of an earlier cut of 8%, the Ontario Clean Air Alliance warns in a blog post.

The move may ease criticism of Wynne’s Liberal government for higher power prices, but flies in the face of recent requests by Ontario Power Generation for dramatic rate increases to cover the cost of its nuclear operations.

Wynne who faces a provincial election next year, is trailing the Progressive Conservative opposition by double digits in polls. Power prices, largely traceable to botched reforms of the energy market when the Conservatives were last in office, have been a big factor in her government’s unpopularity.

“Everywhere I go, I hear from people worried about the price for hydro,” the premier said in announcing the cut, promising that prices will now go down, “stay down, and everyone will benefit.” Wynne said the lower rates would be achieved mainly by rescheduling payments on the utility’s debt.

But while the move has clear political advantages, the Clean Air Alliance warns, Wynne is defying the laws of economics. Last September, OPG, which operates the Pickering and Darlington nuclear stations on the shores of Lake Ontario, asked regulators for a startling 11% rate increase per year over 10 years. Rates would need to nearly triple in all, the nuclear operator said, to keep its fleet of aging reactors working, “maintain its investment-grade credit rating, and ensure sufficient cash flows.”

Instead, Wynne’s action will slash OPG’s revenues and force the utility to “take on billions of dollars of additional debt to ensure that Ontario’s electricity rate increases for the next four years will be held at the rate of inflation,” the OCAA observes.

The environmental non-profit took the opportunity to renew its warnings that OPG could “go bankrupt if the [ongoing] Darlington rebuild goes over budget and our demand for electricity continues to fall.” It said Wynne should instead order the utility to close its oldest nuclear station, at Pickering, when its current licence expires next year, and cancel planned refits of additional reactors at Darlington.

The nuclear stations’ output, the OCAA has long argued, could easily be replaced by cheaper, renewable hydroelectric power imported from Quebec. In October, the Ontario government signed a seven-year purchase agreement with Quebec Hydro-Québec to import 14 terawatt-hours (TWh) of hydropower.

Now, the Alliance warns, Wynne’s decision to cut rates while sticking with nuclear generation “once again raise the larger question of whether we are running our electricity system for the benefit of ratepayers or the nuclear industry.”