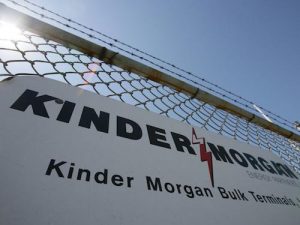 Chief Electoral Officer Keith Archer is already probing allegations, first published in the Globe and Mail, that lobbyists had made political donations in their own names, “while billing the same amounts back to corporate clients under the guise of extra hours,” writes Dogwood Communications Director Kai Nagata.

In a formal request yesterday, Dogwood asked Archer to determine whether Kinder Morgan is one of those companies.

In his March 7 email to Archer and Elections BC Investigations Manager Angela Quintieri, Nagata pointed to “a series of political donations made by staff, contractors, and lobbyists for Kinder Morgan that appear to fit the pattern” outlined in the Globe and Mail investigation.

“Donation records show the B.C. Liberals collected $190,985 in a single day on February 6, 2015, indicating a sizable fundraising event. Several individuals and corporations gave the same amount, $5,000, suggesting that was the price of a banquet table,” Nagata wrote. “One of those $5,000 donations was from ‘Ian Anderson.’ Anderson is the President of Kinder Morgan Canada and the chief in-house lobbyist for the Trans Mountain pipeline and oil tanker expansion project.”

Nagata traced a donation history for Anderson back to 2011, noting that “if this is the same Ian Anderson, then Kinder Morgan cannot have compensated or reimbursed him for any of that money without having violated section 186 of the Election Act.’ As well, “a personal donation of $1,500 or more to a political party in B.C. makes a person eligible for a $500 tax credit. Claiming the credit, if the donation was reimbursed by a company, could warrant scrutiny from the Canada Revenue Agency.”

“If any of these donations represent event tickets or other expenses reimbursed by corporate clients, such activities warrant investigation by Elections BC and, if necessary, the Criminal Justice Branch,” Nagata writes on the Dogwood blog. “Which raises an interesting rhetorical question: how likely would British Columbians be to trust a pipeline company if its executives were behind bars?”