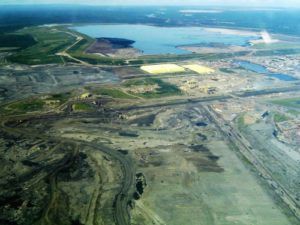 The latest in a series of studies by an eminently qualified environmental geochemist has given weight to arguments minimizing the impact that tar sands/oil sands operations have on the Athabasca River, prompting pushback from established stars in the field.

The discrepancy in results and the ensuing controversy may trace back to the time of year when the water quality measurements were gathered.

Bill Shotyk, former director of the Institute of Environmental Geochemistry at Heidelberg University and now the Bocock Chair in Agriculture and Environment at the University of Alberta, says his sampling of Athabasca River water at 13 sites above and below major tar sands/oil sands facilities “found little difference between lead and arsenic levels in either direction from the mines,” the Canadian Press reports via CBC News.

Shotyk’s research was funded in part by “an industry group focused on environmental research,” CP adds, but the scientist insisted that “our work has not been affected by the source of funds. The folks funding our work simply want the facts. They want to see quality science, and that’s our goal, too.”

The water was analyzed “with equipment capable of measuring water contaminants to parts per quadrillion,” the report notes. Asked whether concerns about contaminants in the river from tar sands/oil sands operations may be overstated in light of his findings, Shotyk answered unequivocally: “Absolutely. No question.”

Shotyk’s researchers found that levels of lead an arsenic were the same upstream and down from tar sands/oil sands mines. “Levels of lead dissolved in the water,” CP reports, “were vanishingly small—comparable to those found in Arctic ice that is thousands of years old.” Some heavy metals associated with bitumen—vanadium, nickel, molybdenum and rhenium—were also present at “tiny” levels.

Other equally eminent scientists, however, were quick to challenge Shotyk’s findings.

Limnologist David Schindler, a widely-admired elder statesman in the field, called into question his U of A faculty colleague’s choice of autumn, when river levels are low and little runoff occurs from nearby landscapes, to conduct his sampling.

Schindler, whose own research has exposed rising levels of many water and airborne contaminants downstream and downwind from tar sands/oil sands operations, told CP that was precisely why he had sampled during the peak runoff season in summer. “That is almost certainly why we were able to detect higher arsenic near and downstream of the oilsands, and they [Shotyk’s team] were not.”

The controversial new research also looked only for heavy metals and arsenic fully dissolved in the water column, not for the total concentrations of those materials, including metallic particles and sediments. In an earlier paper, the news agency reports, Shotyk argued that “unless a metal is in solution, organisms simply don’t absorb it. The same holds true for arsenic concentrations. A third [Shotyk paper] comes to a similar conclusion for snowmelt—that any heavy metals entering the Athabasca do so as particles, often bonded to clay minerals.”

Aquatic biologist Jules Blais of the University of Ottawa challenged that assertion. Blais’ lab “has exposed aquatic animals to sediments containing oilsands materials,” CP reports. Those exposed to non-dissolved sediments, the researcher said, “have higher metal accumulations than those that are screened away from the sediments. We know that the sediments are a source of exposure.”

The level of pollution in the river has been a sensitive issue for the industry and for Canada’s government, which has repeatedly shut down efforts to have the North American Commission on Environmental Cooperation investigate the subject, as it is empowered to do under a side deal to the North American Free Trade Agreement.