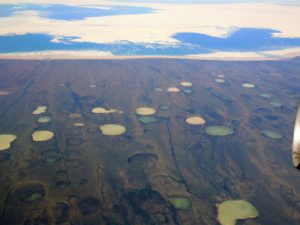 “Slumping and disintegrating” permafrost across a 135,000-square-kilometre (52,000-square-mile) stretch of the Canadian Arctic is disrupting local ecosystems and could soon lead to a huge new release of atmospheric carbon, according to a study published last month in the journal Geology.

“Things have really taken off. Climate warming is now making that happen. It’s exactly what we should expect with climate change,” said study lead Steven V. Kokelj of the Northwest Territories Geological Survey.  “And the maps that we produced clearly indicated it’s not just a random pattern. We’re sort of connecting dots here for the scientific community.”

The study shows that permafrost collapse in the NWT “is intensifying and causing landslides into rivers and lakes that can choke off life downstream, all the way to where the rivers discharge into the Arctic Ocean,” InsideClimate News reports. “The study didn’t address the issue of greenhouse gas releases from thawing permafrost. But its findings could help quantify the immense global scale of the thawing, which will contribute to more accurate estimates of carbon emissions.”

The ICN story surveys other permafrost studies that point to similar impacts across the circumpolar north. The land has been frozen since the last ice age, 10,000 years ago. But now, “as the Arctic warms at twice the global rate, the long-frozen soils thaw and decompose, releasing the trapped greenhouse gases into the air. Scientists estimate that the world’s permafrost holds twice as much carbon as the atmosphere.”

Suzanne Tank, assistant professor of biological sciences at the University of Alberta, pointed to the ecological implications of the Canadian study. “The pulses of silt, mud, and gravel make streams murkier and limit growth of aquatic plants at the base of the food chain,” InsideClimate states. “Exactly how that affects other species, including fish, is the subject of ongoing research.”

Tank told ICN that “most of the carbon in the Canadian melting is being released quickly as coarse particles that aren’t converted to CO2 immediately,” writes reporter Bob Berwyn. “But separate research by Swedish scientists suggests that the soil particles are quickly converted to heat-trapping CO2 when they are swept into the sea.”