Canada, EU Agree to Prevent ‘Vacuum of Leadership’ on Climate 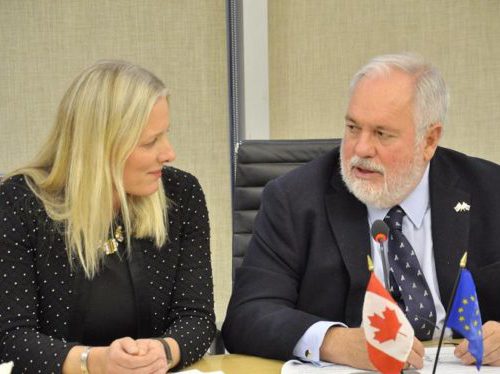 “There cannot be a vacuum of leadership in climate change policy because climate change policies need leadership who show the way and who make other people move,” Cañete told CBC’s The House, in the midst of meetings with Environment and Climate Change Minister Catherine McKenna. “That is the role of Canada. And the close alliance of Canada and the European Union will be very useful to maintain the spirit of Paris and support the enforcement of the Paris rules in the future. We are going to work together closely.”

Canadian Press observes that McKenna “has kept a noticeably lower profile on Canada-U.S. relations since Trump’s victory in November.” While Cañete didn’t refer to the new U.S. administration by name, he acknowledged to CBC host Chris Hall that “there was a very clear leadership of President Obama, a personal involvement,” but “that spirit of leadership, of involvement, will probably not be the same.”

Against that reality, “Canada and the EU are very serious about fulfilling their targets” on climate, Cañete said. “I am absolutely convinced that Canada will reduce its emissions to the levels they have committed.” He added that, “given the current geopolitical uncertainties, our co-operation is more crucial than ever.”

The official release from the meeting affirmed Canada’s and the EU’s “commitment to implement the Paris Agreement fully and effectively, to continue to champion ambitious climate action in numerous multilateral fora, and to demonstrate international leadership, including by implementing our domestic responsibilities. They also highlighted the economic opportunity for clean growth resulting from global action on climate change.”

Ahead of the Ottawa visit, New Europe reported that Cañete was also scheduled to meet with “officials responsible for natural resources and innovation, science and economic development, as well as stakeholders in the energy and environment sector,” emphasizing Canada’s status as “one of the EU’s longest-standing partners.”

The day before Cañete arrived in Ottawa, McKenna signaled to newly-installed Environmental Protection Agency Administrator Scott Pruitt, that Canada “plans to defend” the Paris deal, National Observer reports. “On March 1, McKenna raised the issue with her U.S. counterpart, according to a readout of the conversation released by the Canadian government,” writes correspondent Carl Meyer. The government said McKenna stressed “Canada’s commitment to meet its obligations under the Paris Agreement, address climate change, and to take advantage of the economic opportunity offered by the global market shift toward clean growth.”

“They agreed on the importance of protecting the environment while growing the economy and creating middle-class jobs,” the Canadian embassy in Washington stated, in its own report on the conversation. “The only part of the call that seemed to conflict with Trump’s agenda was when McKenna declared that Canada will be sticking to its commitments under the Paris climate change deal,” the Washington Examiner notes. “Trump has vowed to withdraw from the deal in his first 100 days in office,” although that pledge is currently a matter of fierce debate within his administration.

McKenna told The House she saw a business case for the United States to commit to clean energy. “I emphasized the economic opportunity when it comes to a clean energy economy,” she said. “This is about jobs.”

Cañete’s Ottawa visit also coincided with a Climate Central report that cast doubt on the EU’s vaunted leadership on climate change. “The post-2020 future of the European Union’s cap-and-trade system, which was designed to tax and limit pollution, is about to be negotiated following formal proposals by each of the three institutions that together govern the union,” writes Senior Science Writer John Upton. “At a key moment for the planet, one of the world’s earliest champions of climate action is balking at reforming a dysfunctional carbon market,” instead putting forward “minor changes that would fail to limit greenhouse gas pollution.”

“It’s nowhere near what we need,” said Climate Action Network-Europe policy specialist Anja Kollmuss. “If I speak to European policy-makers I have to tell them, ‘You’re missing the boat. You’re claiming to be a leader on climate change, but you’re not.’”

Upton attributes much of that failing to the technical complexity of the issue and “frenetic industry lobbying” from cement, steel, and fossil interests. The result: Members of European Parliament (MEPs) are “voting on an issue that is highly technical and where they do not really know what it’s about,” Dutch MEP Gerben-Jan Gerbandy told Upton. “They’re very sensitive to lobbying by industrial sectors.”

A month earlier, Cañete claimed in an official report that the continent is “well on track” to meet its 2020 climate and energy targets.

“Europe is forging ahead with the clean energy transition,” he said. “There is no alternative. And the facts speak for themselves: renewable energy is now cost-competitive and sometimes cheaper than fossil fuels, employs over one million people in Europe, attracts more investments than many other sectors, and has reduced our fossil fuels imports bill by €16 billion.”