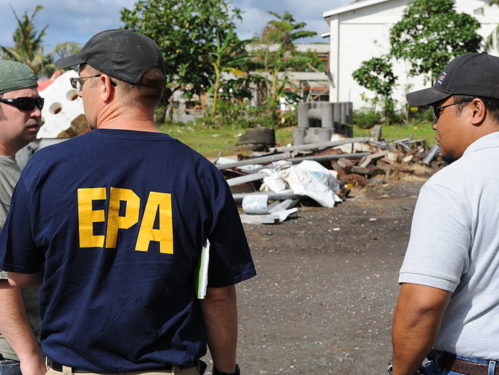 The White House got a bit more specific about its plans to gut the U.S. Environmental Protection Agency, releasing a budget blueprint that targeted one-fifth of EPA staff and shuttered key programs.

Air and water programs and state grants would be cut 30%, research and development 42%, and “38 separate programs would be eliminated entirely,” the Washington Post reports. “Grants to clean up brownfields, or abandoned industrial sites, would be gone. Also zeroed out: the radon program, climate change initiatives, and funding for Alaskan native villages.”

The cuts “would have to be codified through the congressional appropriations process and would probably face resistance from some lawmakers,” write reporters Juliet Eilperin and Brady Dennis. “Rep. Mike Simpson (R-ID), a former chairman of the House Appropriations subcommittee on interior, environment, and related agencies, said he did not think Congress would approve such a steep drop in funding.”

Former EPA officials were aghast, however, reminding the regime that science transcends politics. “Evidence-based decision-making on the environment should not be abandoned,” wrote Thomas A. Burke and Bernard Goldstein, who led the agency’s Office of Research and Development (ORD) under presidents Barack Obama and Ronald Reagan, respectively, and University of Southern California Prof. Jonathan Samet, former chair of the agency’s Clean Air Scientific Advisory Committee, in a commentary in the New England Journal of Medicine.

“Reasoned action and acknowledgment of scientific truth are fundamental to democracy, public health, and economic growth,” they added. “Scientific evidence does not change when the administration changes.”

Samet added that the 42% ORD cut “would be devastating to the nation’s capacity to do environmental health and ecosystem research.”

Greenpeace USA called the EPA cuts “environmental racism in action”, Grist reports. “While this ‘zero out’ strategy would impact nearly every community in the United States,” said spokesperson Travis Nichols, “a close examination shows the burden of these cuts will fall hardest on the health of low-income Americans and people of colour.”

“It’s almost like I might as well just kill myself because I will have no protection,” said Cheryl Johnson, executive director of People for Community Recovery in inner city Chicago. “I won’t have the resources to be able to go and educate my community, or educate even just my family about the environmental hazards in our community.”

Trump is also proposing dramatic foreign aid cuts at a moment when four countries across Africa and the Middle East are approaching famine and 20 million people are approaching starvation, the Post reported. “The United Nations has requested $4.4 billion by March to ‘avert a catastrophe,’” the paper notes. “It has so far received only a tiny fraction of that request.” Much of the crisis is due to drought brought on by climate change.

An analysis by ThinkProgress concluded that Trump’s address to Congress Tuesday evening was “riddled with falsehoods about the energy industry”, including claims that the Keystone and Dakota Access pipelines would deliver “tens of thousands of jobs”. The LA Times said Trump was getting ahead of himself with that claim, while ignoring the real and significant job creation coming from clean energy. Washington Post fact checker Michelle Ye Hee Lee awarded Trump the paper’s coveted Four Pinocchios, reserved for only the most misleading examples of political speech, for the claim the Obama-era Waters of the United States regulation had cost the country “hundreds of thousands” of jobs when it had not yet been implemented.

Climate Progress Founding Editor Joe Romm charged that first daughter Ivanka Trump is greenwashing her father’s administration, not greening it. Members of Congress who had gathered to discuss social cost of carbon accounting ended up debating whether climate change is a thing. The Senate confirmed ex-Texas governor Rick Perry as Energy Secretary, just a few years after he famously forgot the name of the U.S. Department of Energy as he tried to identify it as a federal agency to be eliminated. The White House brought onboard a Koch-affiliated senior energy advisor who believes U.S. environment groups are driven by “Marxist ideology”, and that global warming is a “liberal concept”. And EPA Administrator Scott Pruitt cited brownfield programming and Superfund cleanups as two funding areas he wanted to protect.