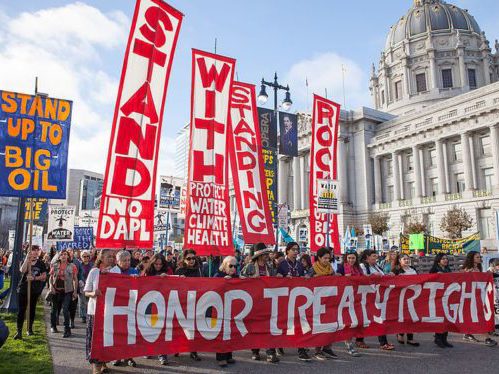 U.S. law enforcement cleared the last few hundred occupants of the Oceti Sakowin resistance camp near the Standing Rock Sioux reserve at Cannon Ball, ND, last week, arresting around 50 people. But many declared that their spirit will carry on—on both sides of the Canada-U.S. border.

“The closing of the camp is not the end of a movement or fight, it is a new beginning,” Tom Goldtooth, executive director of the Indigenous Environmental Network, said in a statement. “They cannot extinguish the fire that Standing Rock started.”

The law enforcement action ended a months-long resistance that at its peak drew global attention to the military-style tactics that police used to try to overcome it. What police failed to do, winter and the onset of a Trump Administration appeared to accomplish. The line’s developers, Energy Transfer Partners, have said the pipeline could be flowing oil within a matter of weeks.

Many of the departing activists said their stubborn resistance is more likely to spread than to fade away. “The embers are going to be carried all over the place,” Forest Borie, a 34-year-old protester from Mexico, told Reuters. “This is going to be a revolutionary year.” Borie plans to go to British Columbia next, “to help the Unist’ot’en [First Nation] in their long-running opposition to pipelines,” the news agency reports.

Possible next targets include the Sabal Trail gas pipeline from eastern Alabama to central Florida, Plains All American Pipeline’s Diamond Pipeline from Cushing, OK to Memphis TN, and another Energy Transfer Partners project in West Texas.

“A lot of people will take what they’ve learned from this movement and take it to another one,” said Tonya Olsen, 46, an Ihanktonwan Sioux from South Dakota, who spent 3½ months at the camp. Olsen told Reuters “she may join a protest if one forms against the Keystone XL pipeline near the Lower Brulé Sioux Reservation in South Dakota.”