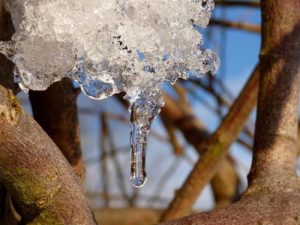 Mashable casts the “lopsided ratio of daily record highs to daily record lows” as “a key indicator of short-term weather variability and, over the longer term, human-caused climate change.”

While “transient weather variability is playing a key role here, the widespread record warmth across the U.S. so far this year is part of a long-term trend toward more warm temperature records versus cold ones,” writes Senior Editor Andrew Freedman.

And on a more gut level, “there’s something about a warm February day that reminds you that something just isn’t right. It gives you that nagging feeling that maybe global warming is real, after all.”

Freedman attributes individual warm days to jet stream patterns that have dumped 500 inches of snow on California’s mountains, while cutting off the flow of cold Arctic air across other parts of the U.S. and North America. But “it’s not the daily records that are most impressive, but rather the number of monthly records that are being tied or broken from the Gulf Coast all the way to the Midwest and northeastward into Canada,” he notes. 736 of them, to be exact, through February 22.

“Even more startling is the number of record warm overnight temperatures set or tied in the past seven days, which total a whopping 940,” against zero record lows. The U.S. National Center for Environmental Information (NCEI) in Asheville, NC also reported 336 monthly highs set or tied, along with 203 records for warmest overnight midnight temperature, over the 22-day span.

“The warm weather in the U.S. hasn’t been a freak phenomenon only occurring for the past few weeks, either,” Mashable notes. “The year-to-date is averaging a record daily highs to record daily lows ratio of more than 4:1, and studies have shown that over the past several decades, human-caused global warming has increased the odds of warm temperature records so that these ratios are becoming more and more skewed.” If not for climate change, the long-term ratio would be in the range of 1:1, and the trend is reflected across the globe.

“This week has been an up-close look at the DNA of what we are seeing in the big picture: relative to historical norms, extreme heat continues to outpace extreme cold across almost every place, season, and time of day in the USA,” said NCEI climate modelling head Deke Arndt. “One thing I remind myself when comparing contemporary events to trends or patterns is that the contemporary events themselves make up the trends and patterns.”